Visual Journey to the Anthropocene 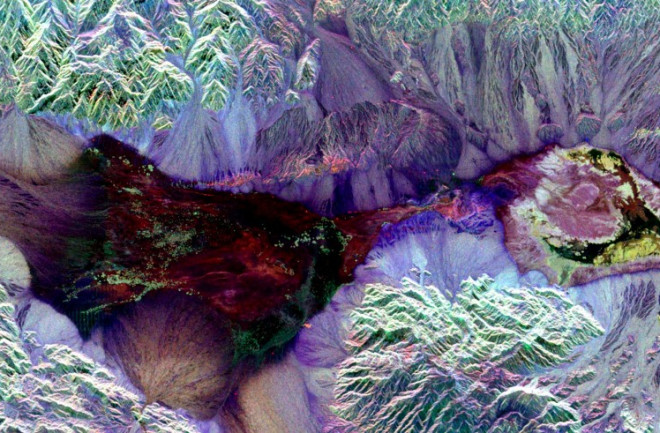 A synthetic aperture radar image of Death Valley, captured from the Space Shuttle in 1999. (Image: NASA/JPL) As I was looking for eye candy to present here at ImaGeo, I stumbled on this luscious image of Death Valley in California. It was taken from the Space Shuttle in 1999 using synthetic aperture radar. And it launched me on a hunt for more images that eventually led me to the Aral Sea in Kazakhstan — along with a possible lesson about the Anthropocene. (Yes, I am surely a geek...) The result is this gallery of images, which tell something of a story. So, how did I get from a mind-blowing radar image of Death Valley to the Anthropocene, the proposed geologic epoch recognizing the idea that we humans are having such a pervasive and profound effect on our planet’s life support systems that we've become a force equivalent to meteorite impacts, colliding continents, and massive volcanic outpourings? Keep reading… The instrument that captured the Death Valley image beamed radar at the ground and then used the return signal to produce the false-color picture at the top of this post. Rough surfaces, such as mountains, are lighter in color. Smooth ones, such as the giant salt flats of Death Valley, are dark. (Also visible are fanlike features — giant aprons of alluvium spilling out of the mountains.) This almost psychedelic image got me to thinking of a visit my wife and I paid to Death Valley many years ago. And like any self-respecting tourists, we ventured out onto the salt flats. (We also went backpacking, but that’s another story…) I was struck by just how white and flat they were. And as I remembered this, another image came to mind, a photograph I took in Palo Duro Canyon State Park in Texas just this past October:

A layer of gypsum is sandwiched between layers of sedimentary rock in Palo Duro Canyon State Park, Texas. (Photo: Copyright Tom Yulsman) This is a vein of gypsum that formed during the Permian Period about 260 million years ago, probably in a salt flat. Except that the environment in which the gypsum formed was near the sea, not in a deep inland basin like Death Valley. At that time, the sea was falling, leaving behind shallow, salty bodies of water along the coast that were highly susceptible to evaporation. As the water evaporated, gypsum accumulated. Buried by eons of sediments, the gypsum formed this beautiful vein. Gypsum still forms today in environments prone to evaporation like Death Valley. Well, this set me off on a hunt for an image of an environment more like the one in which the Palo Duro Canyon gypsum vein formed. Here’s what I found:

A Landsat image of Sebkhat El Melah, an evaporite basin along the coast of Tunisia. (Source: NASA.) In this Landsat image of the coast of Tunisia, the bluish lake-like feature is actually an evaporite basin 58 square miles in extent. Known as Sebkhat El Melah, the basin is, like Death Valley, below sea level. It occasionally receives a fresh infusion of seawater, bringing in new minerals that build up as water evaporates under the intense dessert sun. You can see evidence of those minerals in the lighter colors within the basin. (You can also see what appear to be rectangular salt mines that people have built along the edge.) But how did this visual journey eventually lead me to the Anthropocene? It really wasn’t that much of a stretch. I began wondering where on Earth humans were causing the buildup of large expanses of salt and minerals. And it didn’t take me long to recall one prominent example.

The Aral Sea, as seen in this photograph shot from the Space Shuttle, was formerly one of the four largest lakes in the world. Thanks to irrigation projects that have diverted the rivers that once fed it, it has all but disappeared. (Source: Image Science and Analysis Laboratory, NASA-Johnson Space Center) Long a poster child for the unintended consequences of water withdrawals for agriculture, the Aral Sea, as seen in this southeast view from the Space Shuttle in 1997, is drying up. Today, not much is left:

This is all that's left of the Aral Sea. (Image: Courtesy Chelys Satellite Rapid Response System) In this satellite image from October, 2012 (rotated 180 degrees from the previous one), the Aral Sea has contracted by more than 70 percent into a few disconnected lakes, leaving behind extensive salt flats — a ghostlike reminder of what once was the fourth largest inland body of water in the world. Recently, the World Bank and the Kazakh government have undertaken an effort to funnel some water from agriculture into what’s now known as the North Aral Sea, visible at the very top of the image. But that leaves the South Aral Sea, the elongated, blue and green body to the left of the light-colored salt flats, deprived of the water it needs to survive. It may be gone by 2020. The disappearance of the sea is one highly visible consequence of humanity’s thirst for fresh water. And cotton, a crop with particularly high water needs, was a major culprit in the Aral Sea's demise. Below is a shot of a cotton farm, taken not far, in fact, from Palo Duro Canyon. Which brings our visual journey full circle...

A sprawling cotton field near Lubbock, Texas. (Panorama photo: Copyright Tom Yulsman) According to a report by the World Wildlife Federation:

It can take more than 20,000 litres of water to produce 1kg of cotton; equivalent to a single T-shirt and pair of jeans. 73% of global cotton harvest comes from irrigated land.

Globally, researchers estimate that we use about a third of the planet’s supply of replenishable fresh water on land — to sustain our crops, supply industry, and slake our thirst. The salt and mineral deposits left behind after cotton farming has helped dry up most of the Aral Sea may one day become a geologic marker of our impact. And if geologists a million years from now manage to date these deposits, they’ll find them coincident in geologic time with many other signs of a massive shift in the planetary environment that occurred during our time. Will the timescale these geologists use include the term, “Anthropocene Epoch”?