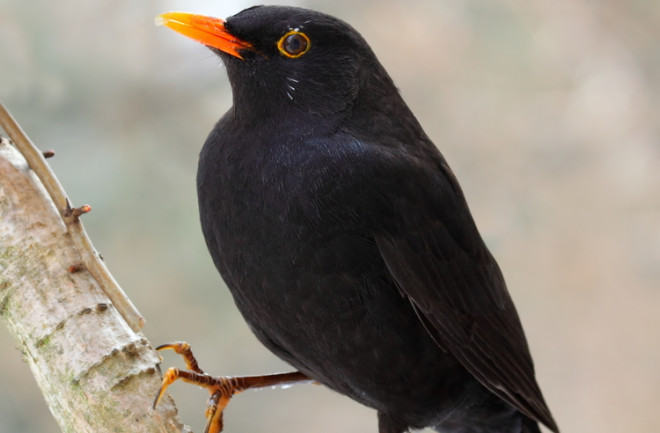 City lights at night make pretty views from space, but they're not so good for sleeping. To overcome a messed up inner clock, many urban dwellers have learned to use light-blocking curtains or eye masks. But people aren't the only ones who have to adjust to this unnatural illumination. Blackbirds, too, are exposed to this nighttime glow, and it actually makes them mature and moult sooner.

Reproduction is a seasonal ritual for birds, hence the term mating season, and they take their cues from their environment. Light is one of the factors that impacts the initiation of sexual maturity, and being exposed to light during the night appears to throw off this natural cycle. In a recent study

, researchers set out to find out the effects of nighttime lights on male reproductive maturity in European blackbirds. They tracked the light exposure of free-flying birds from the city and the country. Then they brought the birds in the lab to see their reactions to controlled light exposures. The researchers measured the birds' testosterone levels and testicle size to compare sexual maturity, and they published their results Wednesday in The Proceedings of the Royal Society B. What the researchers found was dramatic. City birds' testicles were ready for action about 26 days earlier than those of their country-dwelling counterparts. That month-long head-start is a big deal considering their entire breeding season only lasts three or four months total. The concept of birds' sensitivity to light is not new. Chicken farmers have long taken advantage of this fact by using bright lights to increase egg production. But the results of this study showed that even a little bit of light (20 times less than the intensity of a single street light) is enough to throw off the delicate ecological timing of reproductive maturity. Early bloomers could have an advantage by getting to females faster, but if the females aren't physiologically ready to breed yet, these males are out of luck. The ecological consequences of such a timing shift could thus be serious, especially as our world continues to urbanize at an increasing pace.