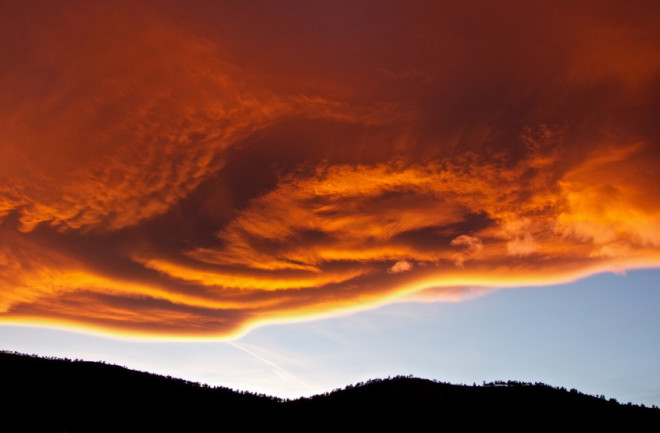 Colorado's Front Range at sunset on Feb. 5. (Image: copyright Tom Yulsman) For my second post here at ImaGeo, I thought I would shift subjects from the Anthropocene to some good, old-fashioned eye candy, with a geo-phenomenon twist. Here in Boulder, I'm fortunate to live in a place where the candy store is positively overflowing with sweets. So my plan is to share some of the goods on a regular basis. I live in one of the most dramatic geographic transition zones on the planet, where 14,000+ foot mountains give way to the seemingly endless expanse of the High Plains. This abrupt transition helps create some of the most dramatic cloud formations you’re likely to see, including what meteorologists dryly refer to as "lee-wave lenticular clouds." We’ll take a look at what these spectacular cloud formations look like, both from below (at sunset), and from above, as seen by a satellite. I shot the photograph of the lee-wave lenticular cloud at the top of this post with my Sony NEX-7 camera. And I grabbed the next image, a panoramic shot, with my iPhone (easily one of the greatest photographic instruments ever invented; a subject for a future ImaGeo discussion…). What you see is pretty much what came right out of the cameras, with minimal post-processing.

Click for a full ~180-degree panorama of a lenticular cloud seemingly hovering over the Front Range near Boulder, Colorado. (Image: copyright Tom Yulsman) Here’s what the formation and dissipation of these kind of clouds look like from above:

Image: courtesy Cooperative Institute for Meteorological Satellite Studies The images used by the Cooperative Institute for Meteorological Satellite Studies to produce this animation were captured by the GOES weather satellite. You’re looking at lenticular clouds forming downwind of the Spring Mountains to the northwest of Las Vegas, Nevada. The jet stream is hitting the mountains, which deflect the air and cause standing waves to form on the downstream, or lee, side. Air rushing over the crest of a wave cools as it rises, causing water vapor to condense and form a cloud. The air then warms as it rushes down into the trough of the wave, causing the cloud to disappear. Over Colorado's Front Range, this phenomenon often leads to elongated clouds that appear to hover right at the transition between the foothills and the plains. And that’s exactly what happened on the evening of February 5^th when I shot the sunset pictures.