UPDATE: Atlas: Greenland is a Different Color Now, Thanks to Warming 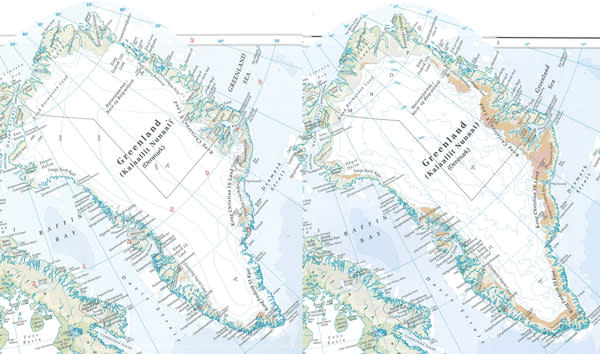 [Originally published 9/16] Greenland glaciers have had a hard time of it lately, what with all the warming and disintegrating

, and in their latest edition, the folks at the Times Comprehensive Atlas of the World have decided to illustrate the island's new look: as you can see above, lots and lots less white. The warming has even created a new island off the east coast: look closely just under the "Gr" in "Greenland Sea," and you can see the words "Uunartoq Qeqertoq (Warming I.)" If we are looking at a radically reshaped world in the next hundred years or more, maybe atlases will have to be more like dictionaries from here on out, recording the dynamic nature of their subject matter. [Update 9/19: Scientists at the UK's Scott Polar Institute have written a letter to the Times saying that the image above is inaccurate

; less ice has melted in the last 15 years than the atlas's image shows. The atlas's publishers, HarperCollins, respond that they created the image using data from the US National Snow and Ice Data Center, and that it represents not only changes due to warming but also "much more accurate data and in-depth research" than had previously been available. Regardless of the causes, however, the image doesn't resemble current satellite images, the Scott Polar group says. Check out a comparison of the images here

. What do you think?] [Update 9/20: HarperCollins now says that the number it quoted--15% of Greenland's ice had melted--is inaccurate, but says that the map is still correct. The polar scientists, however, are saying that portions of Greenland shown as ice-free in the map show up as ice-covered in satellite pictures. Read more here

of where a miscommunication may have come from:

Researchers speculated on the Cryolist that the error came from a misinterpretation of a 1999 map of the Greenland Ice Sheet; cartographers might have defined the edge of the glacier using a contour line that in fact showed where the thickness of the ice fell below 500 metres. That would leave out significant portions of remaining ice.]

[Update 9/23: ScienceNOW has the latest

: it sounds like the source of the error may have been tracked down by researchers, and HarperCollins will add inserts to the already-printed atlas with a new map and explanation. "NSIDC and other researchers managed to track down which of their data sets and maps

the cartographers used: it showed the thickness of the central core of the largest, central glacier, not the peripheral glaciers or extent of the ice cover," writes Sara Reardon at ScienceNOW

. HarperCollins then released this statement:

On reflection and in discussion with the scientific community, the current map does not make the explanation of this topic as clear as it should be. We are now urgently reviewing the depiction of ice in the Atlas against all the current research and data available, and will work with the scientific community to produce a map of Greenland which reflects all the latest data.]

Image courtesy of The Times Comprehensive Atlas of the World, 13th edition, published by Times Books UK, and distributed in the U.S. by Trafalgar Square Publishing