An animation of images captured by the VIIRS instrument aboard the Suomi NPP satellite shows the eye of Typhoon Vongfong on Oct. 9, 2014. One image is in natural color. The other is a false color infrared image. (Source: NOAA/NASA) As I'm writing this, Typhoon Vongfong is slamming Okinawa and will soon pass directly over it. Vongfong has been lashing the Japanese island with winds exceeding 50 miles per hour for most of the past 12 hours. The typhoon's forecast track takes it on a projected course along the length of Japan this weekend, posing significant risks of flooding and mudslides, especially in areas hard hit by Typhone Phanfone, which left at least seven dead in Japan earlier this week. As a followup to a series of images of Vongfong that I posted yesterday, I thought I'd share the two close ups of the cyclone's eye in the animation at the top of this post. They were both acquired by the VIIRS instrument on the Suomi NPP satellite — one in natural color and the other in false-color infrared. I'm struck by the fine detail visible in the natural color image, most especially by the cloud structure inside the eye. And the blue, seemingly bottomless hole that is the eye of the cyclone visually symbolizes the very low atmospheric pressure there. 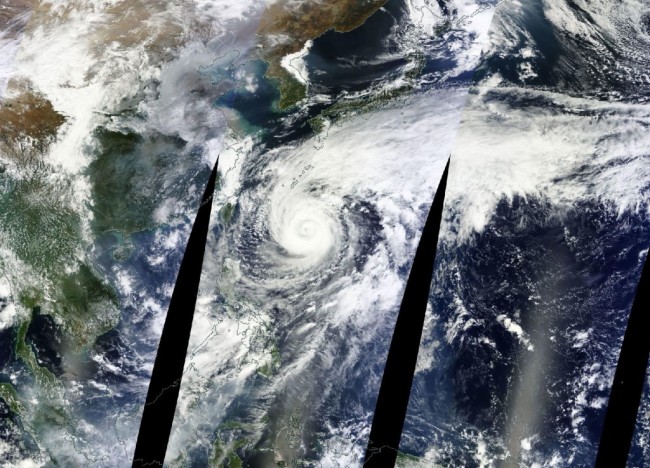 Typhoon Vongfong as seen by NASA's Terra satellite on Oct. 10, 2014. (Source: NASA) To give you a sense of the sheer scale of this storm, I thought I'd share this view of Vongfong from NASA's Terra satellite. (The black stripes are areas of missing data.) Check back over the weekend for more imagery of this dangerous storm.