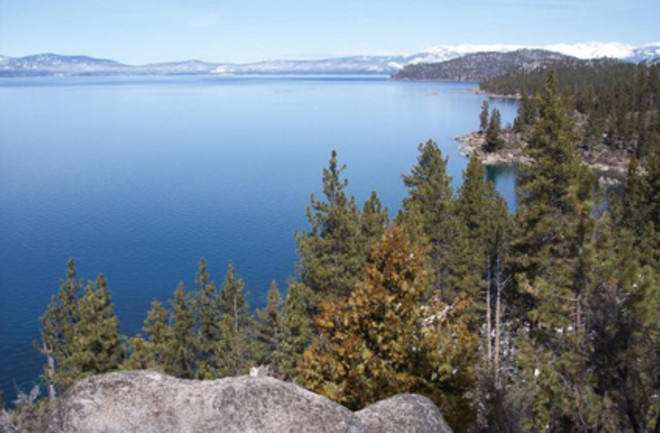 The Lake Tahoe area on the California-Nevada border can be appreciated from a variety of perspectives: Some people focus on the stunningly beautiful alpine lake nestled in the Sierra Nevada range, while others see it as a mecca for skiers and winter sports enthusiasts. When climate scientists look around, though, they see change. Two recent studies suggest that global warming is already altering that beloved ecosystem. The first report (pdf), produced by researchers at the UC Davis Tahoe Environmental Research Center, predicts that snowpack melts over the next century will have a drastic impact on both winter tourism and the water supply.

The average snowpack in the northern Sierra Nevada mountains that ring the lake on the California-Nevada border will decline by 40 to 60 percent by 2100 "under the most optimistic projections," says the report from three researchers at the University of California, Davis.

Under less optimistic models, the melt-off could be accelerated. By the end of the century, precipitation in the region "could be all rain and no snow," and peak snowmelt in the Upper Truckee River -- which is the largest tributary flowing into Lake Tahoe -- could occur four to six weeks earlier by 2100, the report says. [New York Times]

The changes to the region's hydrology could lead to new problems with runoff, erosion, and overflowing stormwater basins. While the researchers note that there is always some uncertainty when predicting far into the future, they also point out that the computer models they used are based on 100 years of data describing the changes in temperature and precipitation that have already occurred in the Tahoe area. The second study

, published in the journal Geophysical Research Letters, used infrared (heat) measurements from satellites to examine the changes to the planet's lakes.

Two NASA scientists used satellite data to look at 104 large inland lakes around the world. They found that on average they have warmed 2 degrees [Celsius] since 1985. That's about two-and-a-half times the increase in global temperatures in the same time period. [AP]

Lakes in the the Northern Hemisphere’s mid and upper latitudes showed the most warming. That includes Lake Tahoe, which has heated up by 3 degrees Celsius since 1985, putting it behind only Russia's Lake Ladoga. Related Content: 80beats: Water Maps Show Stress Spread Out Across the Planet