Tropical Storm Arlene spins up in the Atlantic, two months before average date of first storm of hurricane season

Is climate change playing any role in an apparent lengthening of the hurricane season? 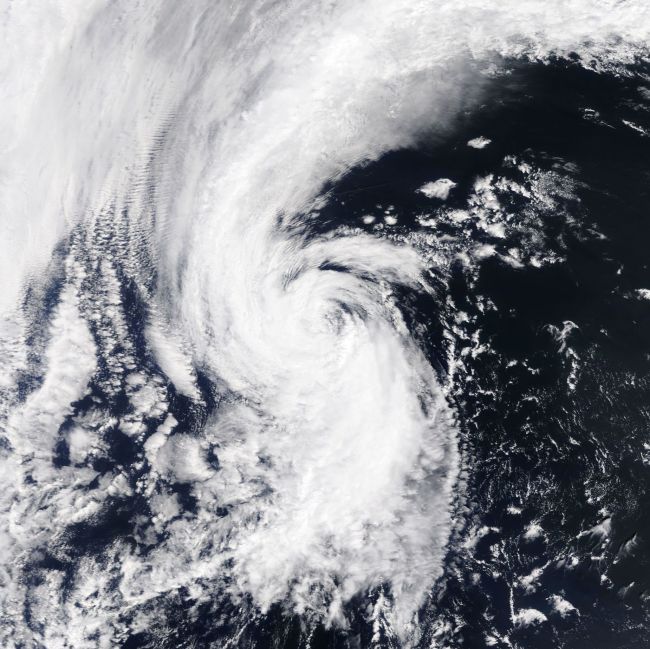 Arlene, as seen by NASA's Terra satellite on the morning of Friday, April 21, 2017 — probably before it was downgraded in status from a tropical storm. The U.S. East Coast is off screen to the left. (Source: NASA Worldview) It's way early for hurricane season to start, but that's precisely what happened yesterday with the formation of Tropical Storm Arlene in the far northern Atlantic. Brian McNoldy, a researcher at the University of Miami's Rosenstiel School of Marine and Atmospheric Science, writing at his Tropical Atlantic Update blog, puts this into perspective:

. . . this is exactly two months before the average date of first storm formation (June 20). It is also the 6th pre-season named storm to form in the past 6 years.

And as Weather Underground meteorologist Brian Henson put it in a post today:

Getting a tropical or subtropical depression in the Atlantic in April is about a once-per-decade event, and a tropical storm in April is even more unusual. The NOAA Historical Hurricane Tracks website shows that only four April tropical or subtropical depressions are known to have formed in in the Atlantic prior to Arlene, although many such systems would have gone undetected prior to the advent of routine satellite monitoring in the 1970s.

Arlene did not stay at tropical storm strength for long. The National Hurricane Center declared it a tropical storm at 5 p.m. on Thursday. And by 11 a.m. on Friday, it had downgraded the storm. But Arlene does not appear to be a quirk. From the mid-1960s at least, there appears to be a trend of earlier and earlier first Atlantic named storms: https://twitter.com/BMcNoldy/status/854731517792329728 A study back in 2008 found evidence that the North Atlantic Hurricane season was getting longer, possibly due to a warming climate. Writing in the journal Geophysical Research Letters, James P. Kossin of the University of Wisconsin, Madison, concluded:

I find an apparent tendency toward more common early- and late-season storms that correlates with warming SST, but the uncertainty in these relationships is high.

"SST" means "sea surface temperatures," and warm waters do indeed fuel storms. So it's logical that warmer waters forming earlier in the season, and lingering later as well, could lengthen the hurricane season. But Kossin offered a big caveat:

The relationship with SST is suggestive of a larger link to climate variability, but no explicit link to human-induced global warming can be inferred from this study.

There has been a substantial increase in most measures of Atlantic hurricane activity since the early 1980s, the period during which high-quality satellite data are available. These include measures of intensity, frequency, and duration as well as the number of strongest (Category 4 and 5) storms . . . However, there is considerable uncertainty in the record prior to the satellite era (early 1970s), and the further back in time one goes, the more uncertain the record becomes.

These changes, too, are linked to warming ocean waters. And the report noted that warming from human emissions of heat-trapping greenhouse gases was likely playing a role. But how much of a role compared to natural variability was then, and is still, a matter of scientific debate.