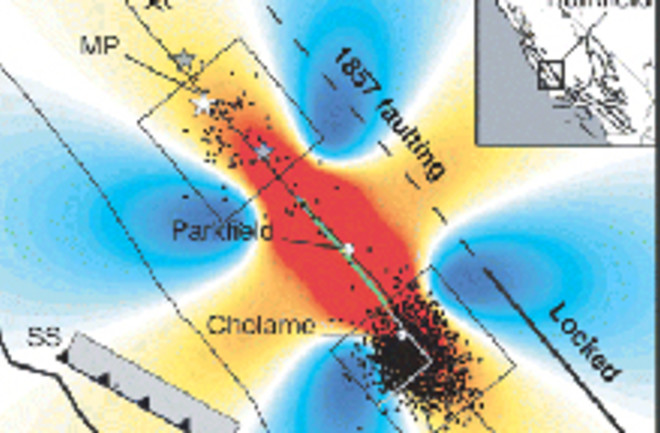 In a central California area with a history of dramatic earthquakes, researchers have detected a worrisome amount of seismic activity deep underground. The researchers looked at data from 76 monitoring stations along the central California stretch of the San Andreas fault, and found that almost 2,200 "deep earth tremors" had shaken the earth since 2001, a span of time that included two earthquakes. Tremors increased around the time of those two quakes in 2003 and 2004, and rates have remained high since then.

Tremors vibrate quietly and can continue for days. Tremors also tend to happen in a deeper, softer part of the Earth's crust, rather than in the upper part typically thought to generate earthquakes [Los Angeles Times].

Researchers don't yet know whether tremors are accurate predictors of the larger earthquakes that can convulse the earth's surface, but Nadeau says they may be a symptom of stress building up on a fault.

"We've shown that earthquakes can stimulate tremors next to a locked (fault) zone, but we don't yet have evidence that this tells us anything about future quakes," Nadeau said.... "But if earthquakes trigger tremors, the pressure that stimulates tremors may also stimulate earthquakes" [San Francisco Chronicle].

In the study, published in Science, researchers report that the highest concentration of tremors were found around the small town of Cholame, which lies just

45 miles southeast of the epicenter of the 1857 Fort Tejon quake at Morgan Peak. [That 7.8-magnitude] temblor, one of the greatest earthquakes in California history, caused little damage because the region was virtually uninhabited at the time, but the fault has generated no significant movement since then and is considered locked for 185 miles to the south. Cholame stands just at the northern end of that locked segment of the San Andreas [San Francisco Chronicle].

"Locked" fault zones are those where the tectonic plates can't slip past each other but are instead jammed, causing stress to build up.

That the area has escaped a major quake since 1857 doesn't bode well for the region, the authors note: "This segment is now fully locked,” and the fault was predicted to have ruptured again between 1942 and 1999, putting it already 10 years overdue for the big one [Scientific American].