Train to be an energy pioneer with NOVA Energy Lab

In Discover Magazine's June print edition, the article "Light Makes Flight" chronicles the story of two pilots who developed brand new solar cells to circumnavigate the globe via a fossil fuel-free plane. NOVA's Energy Lab is a citizen science project you can do now to learn about and contribute to the future of sustainability. 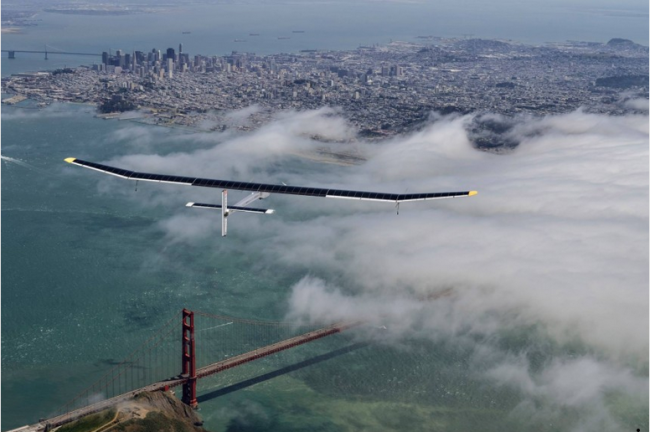 The Solar Impulse flying over the Golden Gate Bridge. The wingspan of the plane is greater than a Boeing 747-81, but the whole plane weighs about as much as an average car. It might seem strange that one of the world’s most well known adventurers is also an energy innovator, but Bertrand Piccard is a visionary in both of these pursuits. After successfully completing the first continuous hot air balloon flight around the globe, Piccard set his sights on a new mission: to pilot the first solar-powered plane to make a non-stop flight around the world . This new adventure has an added challenge from the balloon flight, as maintaining a stable energy supply to the solar-powered plane, especially in the dark, requires advanced energy technologies. To meet this high-tech challenge, Piccard teamed up with engineer and businessman, André Borschberg, and to date, the plane has continuously flown across the US and between European nations. Furthermore, in addition to keeping their plane afloat, a few of their inventions have already been adopted by manufacturers of consumer electronics. While the physical objective of Piccard's Solar Impulse mission is to fly around the globe, the conceptual goal of the project is to draw attention to the capability of renewable energy technologies. But what exactly are these renewable energy sources and how can they be used to meet the electricity demands of the world's population? The answers to these questions can be found in the educational citizen science project, the NOVA Energy Lab. The Energy Lab, one of four NOVA Labs citizen science projects, focuses on demystifying energy production and highlights the benefits and limitations of renewable energy technology in generating electricity. Stephen Connors, one of the scientific advisors of the project, describes that one goal of the Energy Lab is to convey that the energy debate "is not just a multiple choice quiz" - there is no blanket solution and there are many metrics such as cost, land requirements (footprint), and energy output to take into account. 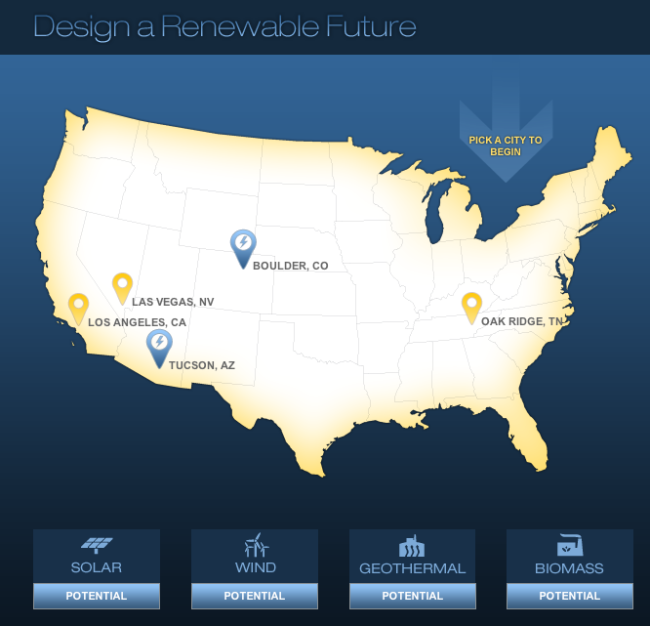 The map of energy challenges offered by the NOVA Energy Lab. Warning: these challenges are addicting! With multiple levels and several variables to tune, it's easy to lose track of time in optimizing a city's energy portfolio. The Energy Lab starts by walking participants through important energy concepts with a series of short videos and follow-up quizzes. Participants then have the chance to put their new knowledge to work with a sequence of challenges, which involve adding renewable energy sources into a city's energy portfolio to meet a percentage of it's electricity needs. Users can compete at these challenges to see who has saved the most CO2 emissions. At level 1, participants are asked to introduce solar power into Tucson, Arizona's energy portfolio, balancing the footprint, cost, and energy output of the solar array. With each level up (and change of city), another renewable energy technology is added into the mix, including wind, biomass, and geothermal. Each of these renewable sources must be weighed with the same criteria of footprint, cost, and output to generate the best overall energy mix for the city. "It’s good to get people to understand these metrics" says Connors. He notes that illustrating the interplay between cost, footprint, and output in making renewable energy installments is "a useful sort of mental mapping to provide people." On his website, Bertrand Piccard describes that the Solar Impulse project aims to "encourage people to be pioneers in their everyday life," even if it's just on a personal level. The NOVA Energy Lab fosters this same innovative spirit and is is a great tool for exploring renewable energy technology.