Tracking Wildlife in Chernobyl: The Emotional Landscape of a Disaster Zone 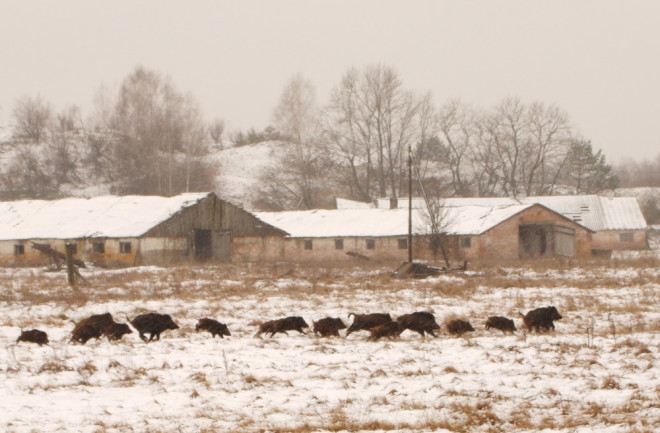 Wild boar on the run near an abandoned village. (Credit: Valeriy Yurko)

(This post originally appeared in the online science magazine Hawkmoth. Follow @HawkmothMag to discover more of their work.)

Nature is taking back Chernobyl. Three decades after a flawed nuclear reactor spewed radioactive material over 200 towns and villages across the borders of Ukraine, Belarus, and Russia, trees grow through abandoned houses, owls hoot from rafters, and boar nest in old barns. A handful of scientists study this ecosystem firsthand. Last year, a collaboration of American, Belarusian, and English researchers published the first studyfinding that large mammals are likely doing better than they were before the accident. Populations rebounded and grew, even in the first years after the disaster. Today, numbers of elk, deer, and wild boar are comparable to those in regional reserves. The effects of radiation on general animal communities are still somewhat unclear. Brown frogs and barn swallows showed evidence of genetic abnormalities in ecosystems close to the reactor, but in eight of Chernobyl’s lakes and streams, heavily irradiated areas did not have fewer species of fish or water bugs than less-contaminated sites. Research has indicated no significant pattern between radiation levels and aquatic species diversity. That’s not to say that nuclear disasters are good for wildlife, scientists caution. But humans, it seems, were worse than radiation. For researchers working in the Exclusion Zone today, that can be an emotional irony. “It's an obvious point really— we're not good for the environment,” said Jim Smith, an environmental physicist at the University of Portsmouth in the UK and coauthor of the recent study. “I think Chernobyl illustrates it— I can’t think in a more dramatic way.”

(Credit: Valeriy Yurko) Nearly 350,000 people were evacuated from the Chernobyl Exclusion Zone. When they left, animals were freed from the human pressures of hunting, forestry, and fishing. Although caused by disastrous means, the agricultural ecosystem rebounded, Smith explained. Habitat loss and fragmentation were two big consequences of Chernobyl’s agricultural economy in the years before the accident, added James Beasley, a wildlife biologist at the University of Georgia and coauthor of the study. Farms cut into forest, giving the animals nowhere to go. Now that the people are gone, wildlife has bounced back. Emotionally, that’s a hard landscape for scientists to navigate. “The first years working in the reserve I felt compassion toward the people that were forced to leave their small homeland,” said lead author Tatyana Deryabina, a wildlife ecologist based at Polesie State Radioecological Reserve in Belarus. But “Over the years, observing the wildlife in this area abandoned by people, this feeling was replaced by another. I thought more about the animals.” Deryabina has worked in Chernobyl for 14 years. When humans disappeared, so did the pressure they put on wildlife, she says. “I was even glad there are no people, and animals have a piece of land where they can feel like home.” Beasley is also torn. “There's a bit of an eerie sadness that overcomes you as you drive through the zone,” he said. Working there is “probably the most emotionally polarizing experience I've had as a scientist.” During the field season, Beasley and a team of American and Belarusian researchers drive through Chernobyl on roads that have languished, empty, for nearly 30 years. They survey, trap, and collar large mammals and predators, like deer, moose, boar, lynx, and wolves, tracking the number and variety of mammals on the land. Radiation detectors the size of cigarette packs are clipped to their pockets.

A lynx near Chernobyl. (Credit: Valeriy Lukashevitch) On the one hand, Beasley says, his work is exciting. It’s a very rare opportunity to work in Chernobyl, and as a wildlife biologist, “whether it be wild boar crossing a creek as we're driving by or a herd of bison out in the field,” he sees signs of life everywhere. “It's almost like being in a national park without people.” But on the other hand, the zone is littered with abandoned agricultural villages — the vestiges of human tragedy, he says. In the houses, “sometimes there are pictures on the table, there’s maybe a baseball bat lying in a corner.” The landscape is a constant reminder of lives turned upside down. For Smith, working in the zone has become normalized, but he still remembers the people left behind. Shortly after the accident, Smith visited a lake in Russia, and met a local fisherman living off the irradiated land. “I said via translation ‘really you shouldn’t be eating this fish’,” Smith remembered. “And he said ‘well what do you expect me to eat?’” The hardship of those years after the accident, Smith says, didn’t leave people with much choice. After the collapse of the Soviet Union, “radiation wasn’t their biggest problem.”Upheaval and instability marked that time. Since then, Smith has waded into a variety of lakes and streams, including Lake Glubokoye, one of Chernobyl’s most contaminated, netting fish and small invertebrates to study the impact of radiation on their numbers and variety.

Buffalo stop for a sip of water. (Credit: Tatyana Deryabina) On a typical day, he and scientific colleagues from Belarus or Ukraine wake up in a local hotel, and ride into the Exclusion Zone by minibus. Once they reach the day’s study site, they set nets or wade in, then count and identify the day’s catch and measure the animals’ radiation levels. The atmosphere is usually “pretty informal and jokey,” Smith said. But there are reminders of the tragic past. Some Belarusian and Ukrainian collaborators remember the disaster firsthand. “One guy told me he was doing fieldwork in the zone at the time of the accident, and only found out about it when he got back,” Smith said. “He’s relaxed because he thinks he’s had his dose.” How does a person make sense of this? Chernobyl is human tragedy tangled up with environmental victory, both at their most extreme. There’s no absolute right or wrong here, no one way to feel. For Beasley it’s a nod to compromise. “Ultimately we need to have some balance between what’s good for wildlife and what’s good for human society,” he said. “This is a good tangible example that I think speaks to that.”