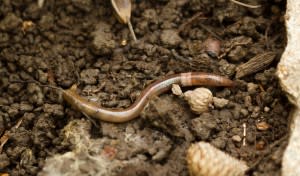 The invasive Asian 'jumping' earthworm. (Image Credit: Modified from Tom Potterfield / Flickr CC BY-NC-SA 2.0) The humble earthworm. Familiar and easy to forget, except perhaps after a rainy day, these benign wriggly creatures are undeniable environmental do-gooders, gently tilling the soil beneath our feet. They are the crux to a health ecosystem. That is the popular notion anyway. Unfortunately, some members of class Oligochaetaare tarnishing that good reputation. In their native habitats, earthworms play a crucial role as decomposers and are an important food source for other animals. Unfortunately, researchers at the University of Minnesota have found that earthworms in the Great Lakes Forest are quite the vandals. Earthworms are newcomers to the Great Lakes region. They were inadvertently brought over in the soil carried on European ships. Prior to European settlement, earthworms had not been present in the area since the last ice age, approximately 14,000 years ago. In this time, the region developed an ecosystem dependent on fungi and bacteria for decomposition. With their arrival, earthworms have changed the structure of the native ecosystem. They churn through organic litter faster than fungi and bacteria, destroying a critical habitat for native Great Lake plant and animal species. Ryan Hueffmeier a junior scientist at the University of Minnesota and program coordinator of the Great Lakes Worm Watch, a citizen science project tracking earthworm populations, says the effects are in plain sight. “Earthworms are removing the nutrient dense ‘duff layer’ of fallen organic matter. We are seeing areas that are just black dirt with very little plant diversity or density. As earthworms alter the nutrient cycle and soil structure, there are cascading effects through the Great Lakes Forest.”

Animals that nest and forage in the healthy understory (left) are being threatened by habitat loss after earthworm invasion (right). Image credit: Great Lakes Worm Watch. To help preserve the Great Lakes Forest, researchers need to identify the species, behavior and population growth of these foreign earthworms. “Knowing where and what species are present, and perhaps more importantly not present, across the landscape can aid in efforts to slow their spread into currently earthworm-free regions,” says Hueffmeier. “Of particular [importance] in the past five years is the spread of the Asian species Amynthas, also known as the ‘Alabama jumper’ or ‘crazy worm’. Our work helps track their movement and as we all know the best way to handle invasive species is to avoid their introduction in the first place.” Citizen scientists can make important contribution to the research by helping scientists conduct landscape surveys. Individuals can choose from three different studies depending on their experience and commitment level. The simplest is the ‘Document and Occurrence’ study. Participants count the number of earthworms present in a specific area and report back to the Great Lakes Worm Watch researchers. The remaining two studies require participants to collect and mail in preserved earthworm samples so the researchers can identify the species. Protocol sheets, equipment, web tutorials and additional information are all available on their website. “Citizen scientists help track earthworm movement at a scale otherwise impossible with our current resources. Plus it is a chance for citizens to learn more about forest, soil, and earthworm ecology that has the possibility to increase ecological and environmental literacy,” says Hueffmeier. “And of course it is fun.” There is a lot of work to be done. If you are interested in helping or learning more, visit SciStarter’s link to the Great Lakes Worm Watch. (Correction: Note this article was first incorrectly attributed to Arvind Suresh.)