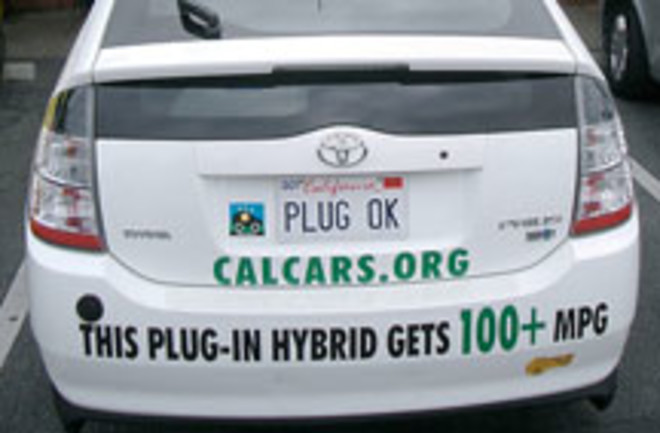 That's right, the Japanese automaker is on a air freshening mission. In a bid to reduce the amount of greenhouse gases its vehicles pump into the atmosphere, the company is working on a plug-in hybrid car, and hopes to bring it to market by 2010. Toyota announced its intentions today at a press conference touting its full slate of environmental initiatives. The company already has a line of hybrid cars that are powered by a combination of gasoline and electricity; they get better gas mileage than standard cars because the battery recharges through the vehicle's motion. The plug-in will take another step in efficiency. With a more smaller and more powerful lithium-ion battery, the engine could store more energy and go farther before requiring the gasoline-powered motor to kick in. The battery would be recharged by plugging the car into any standard power outlet. While this announcement is getting rave reviews in both automotive and environmental circles, Toyota is already thinking about how they can improve on the cutting-edge technology it's proposing.

Toyota, the world's biggest automaker, also said in a statement it would establish a battery research department later this month to develop next-generation batteries that would outperform lithium-ion batteries [Reuters].

In May, the company announced that sales of its flagship hybrid, the Prius, topped the 1 million mark, and credited those 1 million cars with preventing 4.5 million tons of carbon dioxide from being released into the atmosphere. Since carbon dioxide released by cars and trucks is a major source of global warming, the Prius has become a emblem of eco-responsibility. But the Prius was just the beginning of Toyota's grand plans. The average fuel efficiency of Toyota's vehicles improved by an estimated 28 percent over the last decade since the company launched the Prius in 1997, thanks largely to the efficiency of hybrid vehicles, [Toyota President Katsuaki] Watanabe said. "We aim to popularize hybrid vehicles further by introducing hybrid versions on all models by 2020 to 2029."

... "Our view is that oil production will peak in the near future. We need to develop power train (control systems) for alternative energy sources," said Toyota Motor vice president Masatami Takimoto [Thomson Financial].