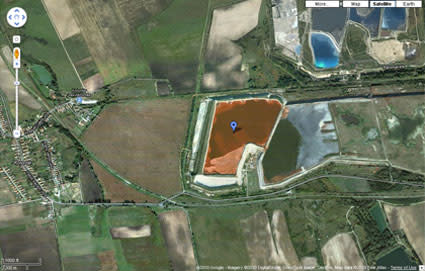 It was a deadly accident and an ecological disaster. On Monday, a reservoir at a Hungarian aluminum refinery ruptured, sending a wave of toxic sludge across three counties (click image to see a map of the area). The spill sent 185 million gallons--a mini-tsunami--of caustic red mud flooding over 16 square miles of the countryside, killing four and sending 120 more to the hospital with chemical burns from the mud, which is an industrial waste product.

The chemical burns could take days to reveal themselves and what may seem like superficial injuries could disguise damage to deeper tissue, Peter Jakabos, a doctor at a hospital in Gyor where several of the injured were taken, said on state television. [The Guardian]

The red flood also destroyed homes and businesses in seven villages in three different counties, and threatens to contaminate nearby rivers, including the mighty Danube. Scientists worry that the highly alkaline

substance may kill many of the river's plants and animals.

At 1,775 miles (2,850 kilometers) long, the Danube is Europe's second largest river and holds one of the continent's greatest treasuries of wildlife.... The river has already been the focus of a multibillion dollar post-communist cleanup, but high-risk industries such as Hungary's Ajkai Timfoldgyar alumina plant, where the disaster occurred, are still producing waste near some of its tributaries. [AP]

The sludge is a byproduct of the refinery, which converts bauxite ore into alumina. It contains heavy metals and can reach pHs of up to 13--highly basic. It is normally processed several times to remove hazardous materials and reduce is pH before it is dried down for disposal. The refinery holds this sludge in large reservoirs (as seen in the Google map above

), one of which burst and released the toxic flood. The country's environmental ministry has ordered the plant to shut down, and cleaning has already started. The cost of the cleanup will be covered by the plant; if they can't afford it the rest of the tab will be picked by the Hungary, possibly with help from the EU. Said a spokesperson for disaster relief services:

The environmental impacts of the flood are yet to be fully understood, but the country is trying to keep the pollution from the sludge from flowing down the river.

Several hundred tonnes of plaster were being poured into the Marcal river to bind the toxic sludge and prevent it from flowing on, the national disaster management directorate said. [The Guardian]

The sludge also flowed over agricultural land, destroying all plant life except the trees and possibly doing long-term damage to the soil. While the country's disaster relief services say the alkalinity of local water is dropping, Greenpeace said they tested the water and found lead, chrome, and arsenic.

“It is still chaos here, nobody knows what to do or where to start,” said one volunteer worker, who preferred to not to give his name. “I think it’s a disgrace. Things are going so slowly. The flood was on Monday and now on Wednesday we’re still waiting for orders.” [National Post]

80beats: After a Massive Tennessee Ash Spill, Authorities Try to Assess the Damage

DISCOVER: Man's Greatest Crimes Against the Earth, in Pictures