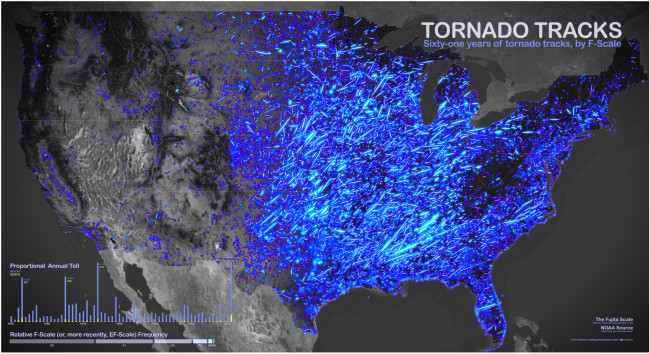 The track of every tornado since 1950 is mapped in this inforgraphic, up through 2011. The brighter the track, the stronger the tornado. (Courtesy John Nelson, UX Blog/idvsolutions) As March comes to a close, tornado season is upon us. What might the coming months bring? More about that shortly. But first, tornadoes everywhere? A quick glance at the infographic above might lead you to conclude that for the eastern two thirds of the country, that's the case. And, in fact, they do turn up in some pretty unexpected places. Like in New York City, for example. (Although not in Manhattan.) But don't be misled: This is a map showing the track of every recorded tornado from 1950 through 2011. So of course the map is packed with tracks. (For an animation showing each year's complement, click here.) 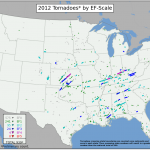 Tornado tracks for 2011. (Image: SPC) The last year represented in the graphic, 2011, saw the second highest number of tornadoes since 1952, according to the Storm Prediction Center. Click on the thumbnail to the right to see a map of all the tornado tracks for that year — which brought the devastating Joplin tornado. That one was an EF-5, meaning it packed winds in excess of 200 mph. It killed 158 people in the Joplin, Missouri area, making it the deadliest since modern record keeping began in 1950. But just one year later, tornado activity plummeted: 2012 is ranked 25th in the number of twisters since 1950. What happened? The same weather conditions that brought severe drought to a large portion of the nation's mid-section conspired to limit tornadic activity. Here's how Andrew Freedman explained it in a post for Climate Central last summer:

The weather has been characterized by a sprawling area of high pressure over the Central U.S., which has brought stifling heat and much below-average rainfall to a broad swath of the country . . . One might think that all of this heat would provide ample fuel for severe thunderstorms. After all, a warm air mass is a main ingredient in severe weather. However, for tornadoes to form, there also needs to be high humidity, strong jet stream winds, and wind shear, which is winds that change direction or speed with height. In July, those ingredients have not come together in the right amounts, at the right time.

What can we expect this season? I put that question to Harold Brooks with the National Severe Storms Laboratory in an email message this morning. As soon as he gets back to me, I'll update this post with his answers. But he was quoted recently as saying that at least for some areas, continuing dry conditions will likely suppress tornado activity:

The drought over the last couple of years has been one of the biggest droughts in Oklahoma history. When you're in a severe drought, almost by definition, you don't have very many tornadoes because you're not having any storms that could produce any tornadoes . . . Hot summers tend to be associated with very few tornadoes.

Here's what I've gleaned about how the climatic situation is shaping up for the next few months: The Climate Prediction Center's seasonal outlook through June is for wetter than normal conditions in parts of the Upper Midwest, but continuing dry conditions in the Southern Great Plains. Along with this, the latest seasonal drought outlook shows modest to significant improvement for some parts of the nation's midsection, but not much if any at all in the Southern Great Plains. I'll be back with an update from Brooks.