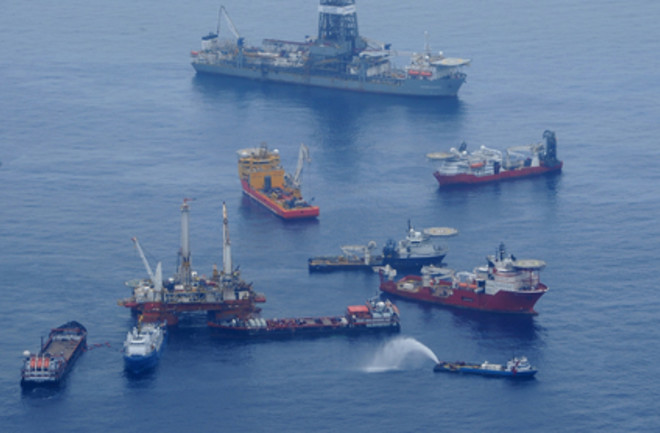 After nearly forty days of wandering in the wilderness of failure and frustration, is this the time that BP finally closes off its oil leak? There's a glimmer of optimism in the Gulf of Mexico right now, as the "top kill" appears to have stopped the flow of oil. But with everything that's happened so far, people are watching nervously and holding off on any celebration until we know the leak is sealed at last.

"They've been able to stabilize the wellhead, they're pumping mud down it. They've stopped the hydrocarbons from coming up," said Coast Guard chief Thad Allen, who is coordinating the US government's battle against the oil spill. He told local radio WWL First News that BP "had some success overnight" but cautioned the British energy giant was "in a period of kind of wait and see right now where they see how the well stabilizes" [Discovery News].

The likelihood of long-term success grows with the passing hours, though, for the sake of caution, it may be tomorrow before BP declares victory on this. It took a lot of pumping heavy mud just to get to this point:

At first, most of the mud was carried away by the oil and gas streaming up through the well at high pressure, but with enough mud being pumped in at a fast enough rate, it started accumulating inside the well as intended. Unless something goes wrong, at some point, enough mud — and thus enough weight — would accumulate to overcome the upward pressure of the escaping oil and gas, and seal the well [The New York Times].

Even if BP does succeed, which we greatly hope that it does, the company then will have a furious public and U.S. government to face. As we noted earlier today, the new flow rate estimates by the U.S. Geological Survey mean that, even at best, the BP spill is already worse than the Exxon Valdez

. And then there are the shortcuts. During the Congressional investigation, witnesses have said BP chose a cheaper but riskier casing that provided just a single protective seal on the system rather than two.

BP’s decision was “without a doubt a riskier way to go,” said Greg McCormack, director of the Petroleum Extension Service at the University of Texas at Austin [CNBC].

a long investigation into what caused the explosion in the first place. Behind schedule and over budget, they say, BP skipped quality control tests on Halliburton's cement job, didn't complete a test to remove gas from the well, and had a project manager who wasn't experienced in deepwater drilling. That's not all.

There were warning signs of a valve leak nearly five hours before the deadly gulf oil rig explosion, according to an internal BP investigation, which also found that a number of equipment and system failures may have caused the Deepwater Horizon disaster [Los Angeles Times].

Recent posts on the BP oil spill: 80beats: We Did the Math: BP Oil Spill Is Now Worse Than the Exxon Valdez