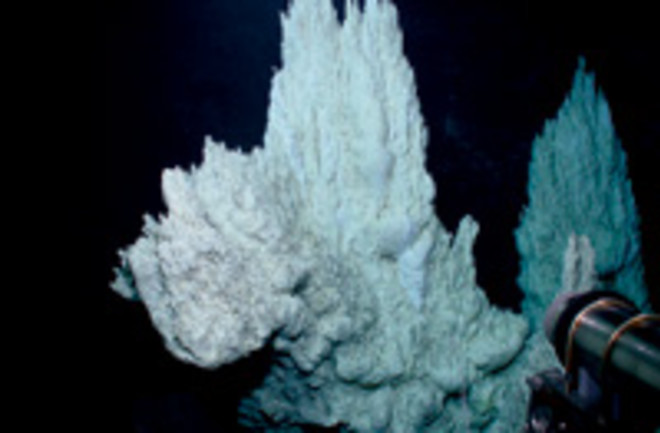 Gretchen Früh-Green, an earth scientist at the Swiss Federal Institute of Technology in Zürich, was stunned to find a network of mineral chimneys rising 200 feet from the bottom of the Atlantic Ocean. In the three years since then, she and her colleagues have returned to the site—called Lost City because of its majestic, calcium-white structures—and learned it is even more remarkable than they first realized. The team’s full analysis of the field, announced in July, indicates that similar chimneys could have provided a stable source of heat and nutrients for the earliest living things.

The discovery began when Früh-Green was monitoring video feed from the Alvin submersible as it trawled across the Mid-Atlantic Ridge, 2,500 feet below sea level. “At first I thought we were looking at corals, but then it became clear that we’d stumbled upon hydrothermal structures. It was an exciting moment—we hadn’t expected to find hydrothermal activity in this area.” In fact, Lost City is unlike any other hydrothermal system because it appears to be unconnected to volcanic activity. This spring, geologist Deborah Kelley of the University of Washington, accompanied by Früh-Green and an international group of collaborators, set out to learn what powers Lost City and identify what kinds of organisms live there.

They determined that the vents emit fluids with a high pH and temperatures of up to 194 degrees Fahrenheit. The heat apparently derives from a chemical reaction between mantle rock and seawater. Such reactions would have been common when Earth was quite young. Lost City is at least 30,000 years old; in principle, that process could continue for millions of years, liberating hydrogen, methane, and more complex organic molecules along the way. That is exactly the kind of long-lived, chemical-rich environment in which many researchers believe life began. Similar chemistry could occur on any world where water overlies olivine-rich rocks—including Jupiter’s moon Europa, a location high on scientists’ lists of places to search for alien organisms.

The traditional periodic table of the elements works fine for chemists in a laboratory, but it’s not so usable for scientists who do a lot of fieldwork, like geologist Bruce Railsback of the University of Georgia. “I found myself trying to point out things that ought to be together but weren’t. I finally came to the conclusion that there ought to be something better,” he says.

So Railsback decided to make up a more inclusive table of the elements—one that groups them by charge rather than weight. Because weight corresponds to the number of electrons circulating around an atom, it indirectly describes reactivity, making the table indispensable to chemists trying to predict how different elements will interact.

But geologists need to know how a mineral dissolves in water or at what temperature it melts, and these properties reflect an element’s ionic state—after it has gained or lost electrons. Because ions of elements carrying similar charges act alike, they are found in similar natural environments. That made grouping them into five families—those in soil, those in Earth’s crust and mantle, those in the atmosphere, those in the basic building blocks of life, and those dissolved in water—an easy task.

“It’s amazing to me how many things grouped together follow the same trend,” Railsback says. “I never would have guessed when I started that it would make this much sense.”

How Everest Came Out on Top

Scientists learned something new about Mount Everest this year: how it came to be. Most thought the mountain was created 50 million years ago when the Indian subcontinent plowed into southern Asia, forcing the Asian plate upward until it yielded the peerless peak.

Instead, says Dave Waters, a geologist at Oxford University, the top part of the granite Indian plate, traveling north, melted nine to 18 miles underneath Asia. Then, like toothpaste coming out of a tube, it squirted back southward to emerge at the Himalayas, where it pushed up a chunk of Asia to make the mountains the tallest on the planet.

This theory is not new, but a team of geologists was able to confirm it—a by-product of its primary mission to create the first detailed geologic map of the collision. The group spent six years exploring Himalayan Nepal and Tibet, examining strata, and collecting rock samples. “We also relied on other climbers to bring back samples,” says Waters. “They can often get to places ordinary geologists can’t.”

From that data, the team, led by Oxford geologist Mike Searle, produced its map, dated rocks, and made yet another startling discovery: Everest is no more than 17 million years old—a tectonic teenager.

Californians are long used to earthquakes coming without notice. Now two scientists have found a way to get several seconds of warning—not much time, but enough to save lives.

Seismologists Richard Allen of the University of Wisconsin and Hiroo Kanamori of the California Institute of Technology looked at the state’s sophisticated network of 150 monitoring stations, which have recorded seismic disturbances as they happen for nearly eight years. The two decided that with a little tweaking the system could do more.

Earthquakes simultaneously emit two kinds of energy waves from their epicenters—S-waves, which collapse buildings and rip up the ground, and P-waves, which pack little energy but travel much faster. The researchers reasoned that if the relationship between the early-arriving P-waves and the later, ground-shaking S-waves could be figured out, a tiny window would open for predicting quakes.

So Allen and Kanamori developed algorithms correlating P-wave characteristics to the strength of the S-waves rumbling right behind them. They then programmed the seismic stations to forward P-wave data to a central site, from which warnings could be issued. The system, called Elarms, is being tested for accuracy and could be in place within two years.

Warning times will depend on the distance from the epicenter of a quake. “At the epicenter, you’d get zero to a few seconds of warning, but at 60 kilometers you’d get 20 seconds,” Allen says. The primary beneficiaries would include airports, utilities, and such emergency services as the police. Allen believes the system could “provide enough time for individuals to take cover, for manufacturers to shut down dangerous machines, and for control towers to stop airplanes from landing.”