To Study Global Warming, Researchers Heated the Ocean Themselves 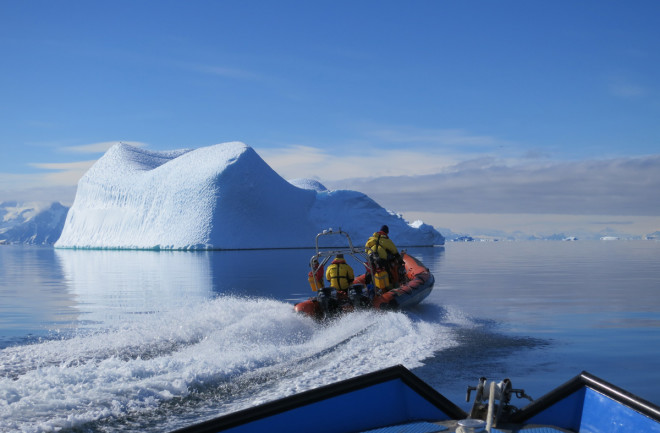 Researchers on their way into the field. (Credit: Gail Ashton) A perennial problem for climate science is that much of it lies in the realm of abstraction. Various models and forecasts compete for relevance, based on arcane statistical formulations that appear as so much gibberish to science reporters and readers alike. Well, rest easy, weary travelers — here's a climate study that leaves the ponderous math behind in favor of a real-world simulation of warming Antarctic waters. Researchers from the British Antarctic Survey decided to see what the effects of a small change in water temperature would be in the most straightforward way possible — they went and warmed the water up themselves.

The scientists took plastic slabs threaded through with heating coils and left them on the seabed near the Rothera Research Station on Adelaide Island for nine months. The experiments, published Thursday in Current Biology, included panels calibrated to warm the water nearby by 1 and 2 degrees Celsius, as well as control panels that produced no heating. Those temperature changes mirror what is predicted to happen within 50 and 100 years, respectively, and the researchers checked back every month or so to see what was happening. After just two months, noticeable differences had already become apparent. The 1-degree panels had become dominated by a single species of bryozoan, a kind of tiny, filter-feeding invertebrate, pushing out most other species. On the panels that served as controls, the ecosystem was much more balanced, mirroring the normal conditions in Antarctic waters. The 2-degree panels were also much more favorable to the bryozoans, but the makeup was a bit more diverse. Still evident, however, was the the loss of diversity as some species began to take over. The time of season also seemed to play into how changing temperatures affected the marine ecosystem. Some species that had been doing well in the summer months began to drop off as fall approached, while others did even better.

The panels placed on the seabed. (Credit: Gail Ashton) The results highlight the fact that global warming won't necessarily kill off all of the wildlife in the oceans; what it will do, however, is cause striking shifts in the ecology. Some species fare better in warm waters while others overheat. Some enjoy water that's more acidic, while others waste away. In the Antarctic, it appears the bryozoans have a rosy future. Other animals, perhaps not so much.

Warming is of special concern near the poles both because those regions are predicted to see the greatest temperature increases and because species there have become adapted to an environment that changes very little. Because it's cold year-round, most of the species aren't equipped to deal with rapid warming. Indeed, among the species that did respond well to rising temperatures, the growth was much faster than researchers anticipated based on previous models, signaling that our understanding of the cold oceans is still limited. "I was quite surprised," says Gail Ashton of the British Antarctic Survey and Smithsonian Environmental Research Center in a news release. "I have spent most of my career working in temperate climates where communities experience much greater temperature fluctuations and wasn't expecting such a response to just 1 degree C of change." The study isn't a perfect model of warming oceans because it couldn't capture factors like rising acidity, nutrient availability or larger-scale changes to the ecosystem. In addition, the warming they initiated also happened much faster than it would in the environment, which could potentially give organisms time to adapt. It was also run over only a short period of time — other effects may take years to set in. Finally, it's worth remembering that this served just as a model of Antarctic waters. Species in other parts of the world may deal with global warming differently. It's abundantly clear that climate change will shift ecosystems around the world, though. Similar experiments run in coral reefs, alpine forests, intertidal zones, and the tundra have all returned similar results. When the environment changes, diversity takes a nosedive as the few species that can survive take over. A 2006 study found that less diverse ocean environments were more prone to resource collapse and had poorer recovery potential, stability and water quality. Diverse environments are more stable and disease-resistant, those with only a few species have little genetic variation to deal with future disasters. So, the Antarctic likely won't become a barren wasteland because of climate change; there will still be plants and animals there. Without the complex, diverse environment that has been built up over the course of millions of years, however, it will have lost something crucial to any ecosystem: resilience.