To Salvage One Endangered Fish Species, Scientists Consider Breeding It with Another 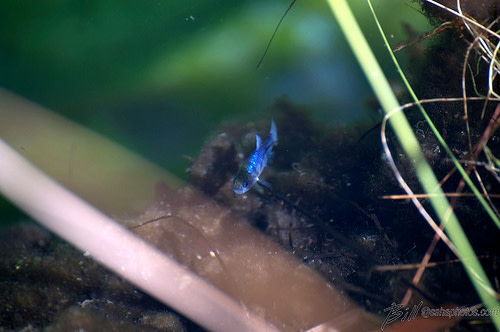 The Ash Meadows pupfish, which may soon form a hybrid species with its cousin, the Devils Hole pupfish.

is an endangered species whose only natural habitat is Devils Hole, a hot spring at the bottom of a hole 500-feet deep which leads to limestone caverns. The fish is suited to its niche environment, requiring extremely hot water, low oxygen levels, and a particular limestone ledge to spawn on. If University of Colorado conservation biologists have their way, it could be the subject of a conservation experiment, writes

Hillary Rosner at Wired: in order to salvage some of dying species' genes, they want to mate it with another species, creating a vigorous hybrid that could supplant the original species. Conservationists have been trying to save the Devils Hole pupfish ever since it became endangered in 1967. Beginning in the 70s, they have made three outdoor artificial pools to house a captive population, but through technical mishaps, two of the three populations were wiped out. In the third pool, however, researchers noticed after a few years that some of the fish had fins---characteristics of other pupfish species but not of the Devils Hole pupfish---and suspected that fish of another species must have invaded. A genetic analysis of the fish from their artificial pool revealed that all of the fish had genetic material from the Ash Meadows Amargosa pupfish

, which is also endangered, that lived downstream in a natural population. The resulting, finned fish were hybrids, and fertile ones, at that. When researchers transplanted members of the hybrid population to hatcheries, they flourished in captivity, unlike the Devils Hole pupfish, which are notoriously difficult to raise in tanks. Now conservation biologists want to try to reproduce the accident in order to save the pupfish in its natural habitat, introducing some Ash Meadows Amargosa pupfish to the wild population in Devils Hole in hopes that the added genetic material would lead to a population boost. Using hybridization to preserve the genetic heritage of endangered species is a counterintuitive, though not a completely new idea. Two prior examples involved breeding animals more closely related than these pupfish: in Florida, scientists have mated two kinds of big cat (puma and panther); in Africa, they plan to mate two varieties of white rhino, Northern and Southern. Not everyone agrees that this is a good idea. According to Wired

, some biologists, including E.O. Wilson, argue for keeping wild animals the way they are. But with only 75 Devils Hole pupfish in the spring as of this September, the fear is that they can't survive in any form without hybridizing.