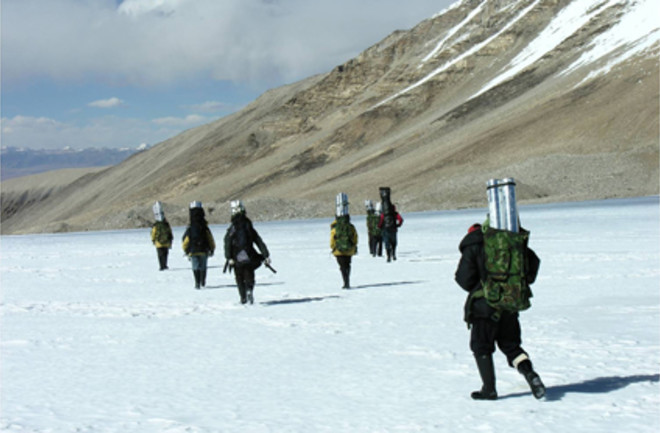 Global warming typically takes the rap for melting glaciers, but in the case of the Himalayan mountain range's dwindling ice, it could have a co-conspirator: soot. Today, at the American Geophysical Union's annual meeting, scientists said that the black carbon spewed out as industrial pollution from the heavily populated areas nearby could be a much larger contributor to glacier melt than previously thought. First, NASA's William Lau says, atmospheric circulation leaves a layer of soot at the base of the Himalayas, and that soot then combines with dust and forms an opaque cloud that absorbs energy.

As this layer heats up in the Himalayan foothills, it rises and enhances the seasonal northward flow of humid monsoon winds, forcing moisture and hot air up the slopes of the majestic mountain range. As these particles rise on the warm, overturning air masses, they produce more rain over northern India, which further warms the atmosphere and fuels this "heat pump" that draws even more warm air to the region [LiveScience]

. Half of Tibetan glaciers were shrinking between 1950 and 1980, Chinese scientists say, but the total has shot up to 95 percent in this century. NASA's James Hansen was a member of one of the two study teams that tackled this problem, and said black carbon could account for as much as half of the glacial retreat, with climate change representing the remainder.

"The science suggests that we've got to better monitor the flue on our 'rooftop to the world,'" Lau said. [LiveScience]

. Beyond the cultural loss and climate change worries, the Himalayas bind the two most populous countries in the world and provide water for a huge chunk of the world's people.

One of the persistent worries in Asia remains a deepening water crisis as high mountain glaciers shrink. Three northern states in India have lost 17.7 cubic kilometers a year for the past decade [GreenTech Media]

. Related Content: 80beats: The Snows of Kilimanjaro Could Be Gone By 2022 80beats: Why Warmer Weather Makes Big Mountains: Snow is the Enemy80beats: From 300 Miles Up, Satellites See Water Crisis in India's Future DISCOVER: The Easiest Way to Fight Global Warming? Why cleaning up soot would do wonders DISCOVER: The Coming Himalayan CatastropheImage: Institute of Tibetan Plateau Research, Chinese Academy of Sciences