I often find myself transfixed when big, towering thunderheads boil up along Colorado's Front Range, where I live. Hail-spitting, tornado-spawning supercells are not required. Even a lone cell can have that effect on me. So when the folks at the Satellite Blog of the Cooperative Institute for Meteorological Satellite Studies began posting animations of thunderstorms taking shape — as seen from space by the GOES-14 weather satellite — I thought I would share them with you, along with imagery shot from the ground. Typically, GOES satellite animations consist of images taken every 30 minutes. But for the two animations I'm posting here, the satellite was put into a 'rapid scan' mode, with images captured every minute. They are, in a sense, timelapse animations that dramatize the incredibly dynamic nature of the atmosphere from a vantage point and at a scale that we don't experience very often. When I look at them, I get a sense of an atmosphere boiling and seething with energy — solar energy, of course. The animation at the top of the post shows the development of thunderstorms near Las Vegas on Aug. 14, 2014. These storms caused some flash flooding. FYI: Some of the fine detail in the clouds has been lost in the Youtube video. It also goes by kind of fast. So for a higher resolution version that is also a bit slower, check out the CIMSS post here. The animated gif may take awhile to load. Be patient. It's really cool once it's running. 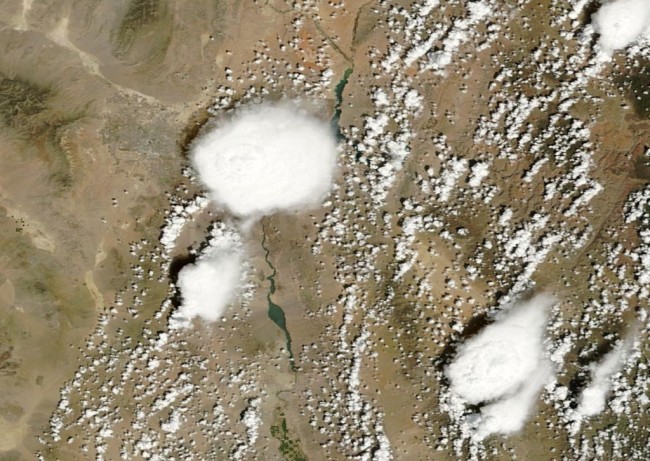 The birth of thunderstorms on Aug. 14, 2014 near Lake Mead and Las Vegas was captured by NASA's Terra satellite. (Source: NASA) The image above shows another view of the scene. It was acquired by NASA's Terra satellite just as a thunderhead was blossoming east of Vegas. If you look carefully at the image, you can see the gray and green tones indicative of the city's developed area. And in the upper middle of the image you can spot Lake Mead, the giant reservoir along the Colorado River that has shrunk to an historic low level during an extended drought. Here are some other views of those storms, posted to Twitter, as well as one that formed over the Grand Canyon not that far from Vegas:

Saw this awesome thunderstorm over the Grand Canyon on my flight home from Vegas. I <3 weather #scwx@EdPiotrowskipic.twitter.com/GVuNbb8LTI — Gerard Jebaily (@GerardJebaily) August 15, 2014

And here is another GOES-14 rapid scan animation, this one acquired yesterday over the southern Mississippi Valley: https://www.youtube.com/watch?v=mlR__UBOAGI It shows the development of what's known as a "mesoscale convective vortex" — an agglomeration of thunderstorms with a low pressure center within it that's pulling winds in, creating a vortex. If you watch the video carefully, you can spot the vortex forming and beginning to swirl counter-clockwise, with thunderstorm cells arrayed along its arms. (And for a higher resolution, slower version of the animation, check out this Satellite Blog post