Tiger Summit: World Leaders Gather to Save the Big Cat From Extinction 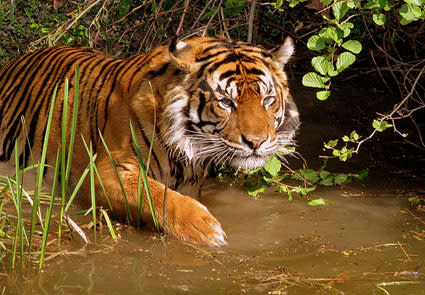 The buzzwords of the week in Moscow are tiger and conservation. Sunday marked the opening of the worldwide tiger summit, which brought together high-level representatives from the 13 tiger-habitat countries, including Russia and China, to discuss the best plan to save the tigers. The meeting goes through Wednesday. Only about 3,200 tigers remain in the wild, and without help experts say populations will start to go extinct in less than 20 years.

"Here's a species that's literally on the brink of extinction," said Jim Leape, director general of conservation group WWF. "This is the first time that world leaders have come together to focus on saving a single species, and this is a unique opportunity to mobilise the political will that's required in saving the tiger." [BBC News]

The working plan includes provisions to decrease poaching and smuggling of the tigers and calls for more protected habitats. Researchers say that if tigers are left alone and provided with enough habitat and prey, the population could double in 12 years.

However, the World Bank estimated that the 13 countries that still have tiger populations — Bangladesh, Bhutan, Cambodia, China, India, Indonesia, Laos, Malaysia, Myanmar, Nepal, Thailand, Vietnam and Russia — will need about $350 million in outside financing for just the first five years of the plan, in part to give incentives to local communities to help with conservation. About a third of the money would go to anti-poaching efforts. [New York Times]

of the tiger's habitat (the 42 most important sites) could preserve 70 percent of the population, and would cost just $80 million per year. Right now only $50 million per year is coming in for tiger conservation. Jean-Christoph Vie of the International Union for the Conservation of Nature says that by challenging countries to increase their tiger populations, the world will see who is really serious about conservation and biological diversity.

"Some people are saying 'well, doubling the tiger population is good, but we have no room' - I've heard that said [in preliminary meetings]," he told the BBC. "It needs to be done everywhere - especially we need to see a doubling where you have significant populations. If you leave tigers alone and don't kill them and don't poach them, then naturally they will double in 10 years." [BBC News]

One of the biggest problems facing tigers is continual poaching, due to a lucrative industry in tiger parts. Many of the tiger habitats around the world are not well protected, and often ranger stations are understaffed or lack basic equipment.

"The poachers drive around in four-wheel drive vehicles and they’re heavily armed," said Sabri Zain, advocacy director for Traffic International, a wildlife protection group based in Britain. "The people who are supposed to be out catching the bad guys don’t even have shoes to wear out in the field. A lot more needs to be done to provide proper resources to the authorities," he said. [New York Times]

Money also needs to be funneled into research, to help scientists get an idea of the true size of the population. Researchers recently published a new study

in the British Ecological Society's Journal of Applied Ecology, which showed that they could use tiger scat and fresh footprints to identify and monitor individual tigers in the wild. Keeping a close eye on the population will help researchers monitor the effectiveness of the conservation strategies. Related Content: 80beats: A Last Chance Plan to Save Wild Tigers

80beats: Tigers and Humans Tangle in Sumatra; Both Sides Lose

80beats: Kenya’s Man-Eating Lions Not as Man-Hungry as Previously Thought

Discoblog: 2 Ways to Keep an Eye on Illegal Logging: Watch on Tiger-Cam; Bug the Trees

DISCOVER: Elephants Stomp eBay in Round One of the Animal-Auction Wars