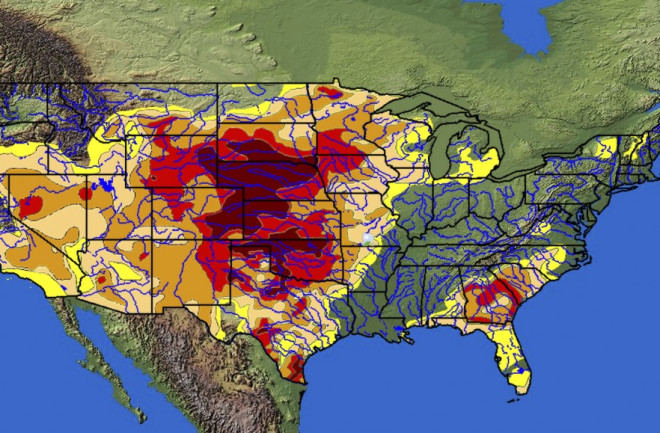 As of Feb. 12, more than half of the U.S. was in moderate to severe drought. (Image: USGS VegDRI —http://vegdri.cr.usgs.gov/viewer/viewer.htm) Update 2/21:

A large winter storm sweeping toward the heart of the drought area in the Midwest is expected to drop a foot of snow or more. And another storm is forecast for Monday. This should work out to a bit more than an inch of precipitation. But according to meteorologist Jeff Masters, ending the drought in the core area will require 3 to 9 inches. So this will make a dent, but much more will be needed.

The giant red splotch in the map above looks all the world like a gaping wound. And in one sense, that's kind of what it is — a wound in the heartland of America. The darkest red colors show the parts of the United States suffering from extreme to exceptional drought. The tans show areas of somewhat less intense drought. Although recent storms have brought some improvement, almost 56 percent percent of the nation is experiencing moderate to exceptional drought. The dryness has been hanging on for months. And during the growing season last year, it caused a great deal of stress to vegetation, including crops, throughout the U.S. heartland, in the West, and Southeast.

The evolution of drought stress to vegetation is shown in this animation covering all of 2012. After the end of the growing season, drought actually continues across much of the United States, but the vegetation stress declines because plants have gone dormant for the winter. (Image: http://drought.unl.edu/MonitoringTools/VegDRI.aspx) The animation above shows drought stress to crops, as determined by the Vegetation Drought Response Index. VegDRI is based on remote sensing data, as well climatic and biophysical data, such as the amount of available water in soils. Although there may be some good news in store for parts of the Upper Midwest, for the Southwest and Southern Plains, the outlook for precipitation through June is not looking very good.

The Climate Prediction Center forecasts below average precipitation for March, April and May (and extending through June as well) across most of the southern tier of the United States, including the already parched Southwest and Southern Plains. (Image: Climate Prediction Center — http://www.cpc.ncep.noaa.gov/products/predictions/90day/) As the map above shows, Wisconsin, Minnesota and Iowa may get some relief. But the odds are that almost all of the southern tier of the United States will experience below average precipitation. That includes some places that have been stricken with exceptional drought, including parts of New Mexico, Texas and Oklahoma.