This Map Shows Ecosystems Most Affected by U.S. Consumption 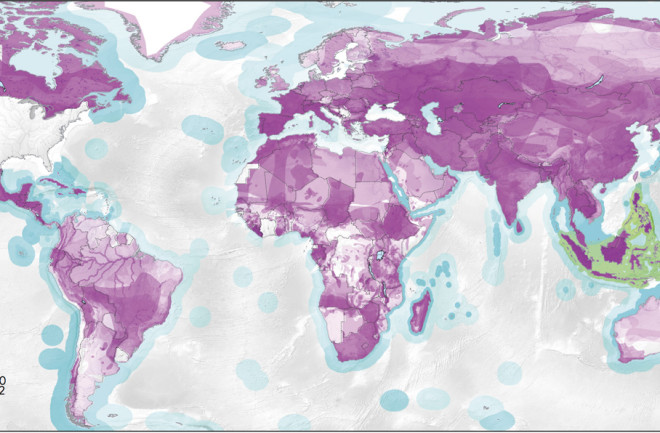 A map of biodiversity hotspots affected by U.S. consumption. Areas in darker purple are those more affected on land, while blue and green indicated areas affected in the ocean. (Credit: Daniel Moran and Keiichiro Kanemoto) For all the talk of American manufacturing, it's pretty difficult to find products that come solely from the U.S. anymore. In the quest for new markets and resources, the global economy has stretched its tentacles to far-flung corners of the globe, pulling in resources and harnessing the power of cheap labor. Unfortunately, many of the most economically lucrative regions are also hotspots of biodiversity, harboring species close to the brink of extinction. It's the classic division between economic and environmental preservation, and researchers recently attempted to illustrate how consumption habits in the U.S. impact delicate ecosystems around the planet.

Using a model of global trade, researchers from Norway and Japan traced products from 15,000 industries back to their origins, and compared that to the ranges of some 6,800 threatened species using data from the International Union for Conservation of Nature and Birdlife International. The end result is a map highlighting areas of the world that are both rich in both biodiversity and lucrative resources. The researchers compiled separate visualizations using consumption data from the U.S., China, the E.U. and Japan. Each illustrates the different supply chains each economy relies on to source their goods, although a few regions seem to be imperiled by consumers from all over the world equally. The researchers published their work Wednesday in Nature Ecology & Evolution.

In the U.S., for example, Southeast Asia and its oceans are unsurprisingly a region of high environmental impact. Our influence also extends to Spain and Portugal, however, where the researchers say a number of bird and fish species are at risk. As the world's next biggest economy, China also relies on areas across the world for its goods, particularly Myanmar and Mongolia, as well as western Asia in general. Consumption patterns in the E.U. are felt most heavily in Africa and western and Southeast Asia. Even the U.S. is not immune to biodiversity risks from consumption. Although we're not as heavily affected as less affluent parts of the world, the eastern part of the country is impacted by consumption in China, the E.U. and Japan. Researchers also broke down the threats by type: looking at the U.S. impact in Asia, our agricultural consumption affects Malaysia and Cambodia most heavily, while residential and commercial development endangers the species-rich waters surrounding Indonesia. What's more, many of the threats are concentrated — the 5 percent of sea area that is most affected includes 60 percent of affected species.

A breakdown of threats by causes for the U.S. The intensities are not relative to each other, and can't be compared between maps. (Credit: Daniel Moran and Keiichiro Kanemoto) Researchers say they can also calculate the level of threat different countries pose to species. Two percent of the risk faced by the stub-footed toad in Brazil, for example, is due to logging operations spurred on by consumption in the U.S., according to the researchers calculations. We should be careful not to make overly specific conclusions from the map, but it does serve as a tool to highlight places on the planet that would be best served by conservation efforts. Previous attempts to link consumption in one place with environmental impacts in another were only able to give data on a country-wide level. Because species' habitats often cross country borders or exist in only a small portion of a country, this data wasn't detailed enough to tell researchers which species were truly at risk. With this new information, they hope that conservation dollars can follow trade routes back to their origins, to help the areas where consumption causes its greatest impacts. As the thinking goes, if U.S. economic activity disproportionally affects a particular area, we should be spending the most money on conservation there.