The West's Wildfire Surge: It's Nasty, It Could Set a Record. But Should We Cool the Rhetoric a Little? 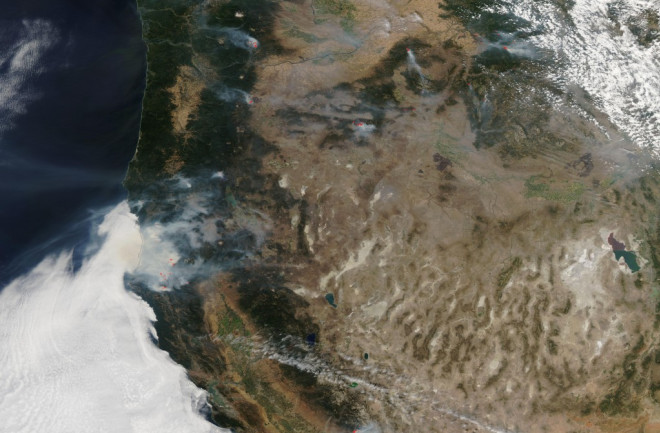 Numerous smoke plumes from dozens of wildfires burning in the western United States are visible in this image acquired by NASA's Aqua satellite on Tuesday, Aug. 18, 2015. Red dots mark places where the satellite sensor detected heat from active burning. (Source: NASA Worldview) As of today (Aug. 19), 78 large fires were burning across 1,260,830 acres in ten states, most of them in the western United States, according to the National Interagency Fire Center (NIFC). You can see smoke plumes from many of these blazes in the satellite image above. The region has seen a dramatic wildfire surge in recent weeks, with 16 new large blazes reported on Monday, Aug. 17 alone (and four new ones today), most of them in Idaho and Montana. Some 30,000 firefighters are battling the blazes, and resources are getting stretched thin. "Based on the number of large, uncontained fires on the ground right now, overall we will probably wind up burning on the higher end of the historical records," says Randy Eardley, spokesperson for the NIFC.

Yes, this a dangerous situation — and it is likely to get worse before things improve as conditions moderate with the coming change of seasons. It's also a harbinger of even worse fire seasons to come, thanks to climate change. But I also have to say that some of the media coverage of what's happening has been running a little too hot. Mea culpa — I can be prone to that sort of thing too. But in a spirit of constructive criticism, and with accuracy as the goal, my goal with this post is to cool things down just a little. A Washington Post story today by Chris Mooney does a good job of spelling out what's happening in the West right now. And by any standards, it is definitely not a pretty picture. But with words like "exploding," "tragic," "terrifying," "staggering," "alarming," and "gigantic convulsion," the piece is a bit overwrought. Those words violate something I tell my Science Writing students: show, don't tell. High up in his article, Mooney notes that the "total acres burned so far in 2015 is now a staggering 7.1 million, with currently burning fires accounting for over 1 million of that total." He accurately quotes a release from the NIFC saying, “This is the earliest the number of national acres burned has been more than 7 million in the past 20 years.” He goes on to say:

Together, this information conveys the impression that something bordering on unprecedented has already happened. And it is, in fact, true that something extraordinary has already occurred in 2015. In Alaska.  But until two or three weeks ago, the lower 48 states were actually having a relatively mild fire season. That wasn't in the story. It should have been.

NASA’s Terra satellite acquired this image over Alaska on July 12, 2015. Actively burning areas are outlined in red. At the time, about 300 fires were burning, and 4.7 million acres of the state had already been charred. (Source: NASA Worldview) Mooney rightly notes that of the 7.1 million acres that have burned so far this summer in the United States as a whole, 5.1 million of them were in Alaska. But this is more of an afterthought than a main thought in the story, perhaps because Mooney recognized that it muddies the waters a bit. Sometimes, though, a little nuance is necessary to provide a fully accurate picture. So with that in mind, I'll muddy the waters a bit... Wildfire activity has actually calmed down in Alaska now — also unmentioned in Mooney's story. The action has shifted to California, Oregon, Washington and Idaho. And while that activity is undeniably intense, compared to Alaska it still represents a small percentage of all the acreage that has burned in the United States so far this year. I think that simple fact deserves to be more than afterthought. For the record, Randy Eardley at the NIFC politely takes exception to how I'm seeing things:

Alaska is part of the United States, and yes they've burned the bulk of the acres so far. But Alaska has always been factored into how many acres have burned. And I don't see why you would take it out.

In reality, though, I'm not trying to take Alaska out of the picture. But I am trying to present a fuller, more contextualized picture. And I believe using intense wildfire activity that occurred almost a month ago in Alaska to make a point about current activity 1,000 miles away is a little misleading. Make no mistake about it, that current activity is nasty enough — and it has ramped up very quickly. "We went through a period in the lower 48 with a lot of moisture and cooler temperatures in July," Eardley says. "Then it turned around on a dime. It was like we were driving down the street at 20 miles per hour, and all of sudden we had the gas pedal on floor and were going 60." As I was trying to wrap my head around what has been going on during this highly unusual year, I crunched some numbers from the NIFC. (You can find the raw numbers for yourself here.) What I found was instructive: There is no denying that Alaska has already experienced an astonishing year. The 5.1 million acres of the state that have already burned shatter the annual average of the past decade of 1.15 million acres. Blame it on a relatively warm, dry winter. But it's also important to point out that while a changing climate is making bigger and more intense blazes like those Alaska experienced more likely, wildfire is a natural part of boreal ecosystems. And fire suppression efforts of the past may also be playing a role in making fires bigger and more intense. As a major 2006 report on wildland fire in Alaska concluded:

In sum, it is not possible to keep fire out of the boreal forest. It is not a matter of whether it will burn, but when. Scientists do not fully understand what the natural fire regime is, but they have shown that excluding fire is not natural and leads to unacceptable results; suppression just delays the inevitable.

What about the rest of the United States — minus Alaska? So far this year, about 2 million acres have burned in this region, compared to the full annual average between 2005 and 2014 of 5.69 million acres. Wildfire activity in the lower 48 doesn't typically wind down until September, so we've still got weeks of potentially devastating fire activity to go. Will 2015 become enshrined in the record books as the most firey year on record for the United States as a whole, including Alaska? For that to happen we'll have to exceed 9.87 million acres total. At 7.1 million acres so far, we're not there yet. How likely are we to get there? "There is no way to say," Eardley says. "But it is a little bit staggering — the number of large fires going on now, the number of people deployed to fight them, and where we’re at in terms of acres burned. That’s just the way it is. This is what we’re faced with."

The latest forecast from National Interagency Fire Center, as seen in the map above, shows wildfire potential returning to normal in much (but not all) of California during September. Ditto Alaska's high risk areas. That said, the potential for wildfire will remain high in all of Washington, and parts of Oregon and Idaho. And a whole lot of acreage could burn there still — especially considering that El Niño is likely to keep that region relatively dry and warm through the winter. Perhaps my caution is unfounded. But as a journalist, caution and skepticism are part of my default settings. Those qualities are sometimes overwhelmed, I admit, by ever-stronger incentives to go for clicks. So perhaps I'm writing this piece as much for myself as anyone else.