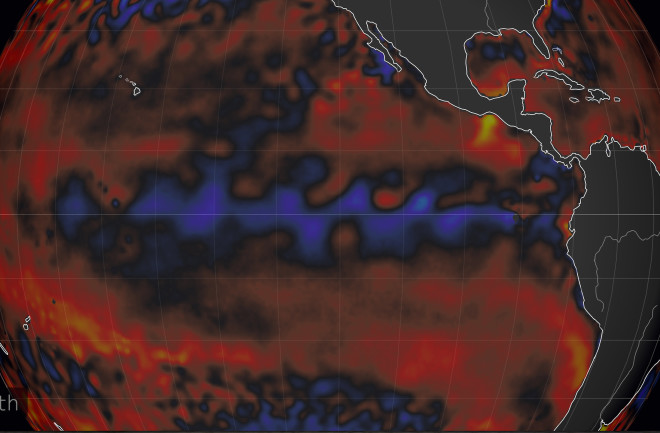 The swath of blue across most of the central and eastern equatorial Pacific in the visualization above shows cool sea surface temperatures indicative of La Niña. (Source: earth.nullschool.net) Last month's forecast of a continuing La Niña has panned out, with cool sea surface temperatures persisting across most of the central and eastern equatorial Pacific Ocean. It's a weak La Niña, and in all likelihood it will peter out by March, if not sooner, according to the just-released monthly update from the Climate Prediction Center of the National Weather Service. But even though it is relatively puny, La Niña is already tipping the odds toward above average warmth and below average precipitation across much of the southern tier of the United States during December, January and February. Meanwhile, temperatures should dip below average and precipitation should be more copious than normal in parts of the nation's northern tier.

The outlook for temperature (left) and precipitation (right) for December, January and February in the United States. (Source: Climate Prediction Center) As the cool, flip side to El Niño, La Niña tends to depress global temperatures somewhat. But contrary to widely circulated claims made last week in Breitbart.com, we shouldn't expect it to have any appreciable impact on the long-term climb in global temperatures caused by humankind's emissions of carbon dioxide and other greenhouse gases. https://twitter.com/weatherchannel/status/806221200229703680 As the graph in the The Weather Channel's Tweet shows (see above), both El Niño and La Niña are associated with year-to-year ups and downs in global temperatures — but these are superimposed on a long, inexorable upward trend.