Last night's climate claim was just one of many going back years. Others include falsehoods on energy, China and climate change, and drought in California. 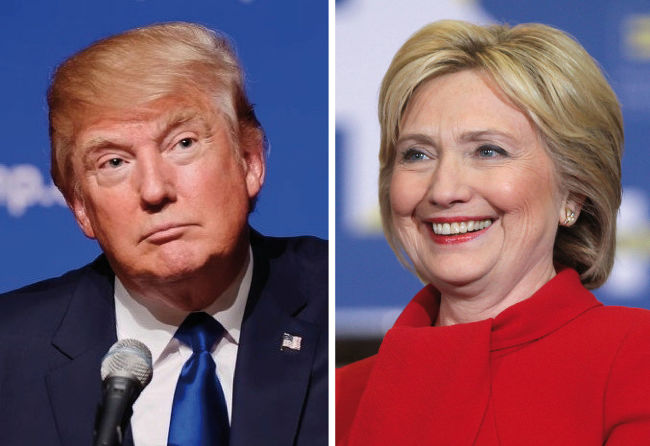 Donald Trump, as photographed on Aug. 19, 2015, and Hillary Clinton, on Jan. 24, 1956. (Source: Wikimedia Commons. Photo of Trump by Michael Vadon; of Hillary Clinton by Gage Skidmore.) Science came up explicitly just once during the debate last night, as Dan Satterfield admirably pointed out quickly in an American Geophysical Union blog post. It happened when Clinton accused Trump of saying that climate change was a hoax. Trump butted in, saying, "I did not, I do not say that." Except, he does. The trail of fact-checking breadcrumbs that prove Trump's claim to be, well, a hoax, leads to other equally mendacious statements he has made on climate, energy and other issues. Let's follow the trail, starting first with his denial that he ever said climate change is a hoax. Have a look at these comments he made on Fox News and judge for yourself: https://www.youtube.com/watch?v=PbMZdbgpVD8 This was not just a one-off. Trump has been making similar claims about climate change for at least four years: https://twitter.com/realDonaldTrump/status/265895292191248385 On Jan. 18th of this year, Trump said he meant his hoax riff merely as a joke to draw attention to the China issue. As Politifact has reported, Trump told Fox and Friends:

Obviously, I joke. But this is done for the benefit of China, because China does not do anything to help climate change. They burn everything you could burn; they couldn't care less. They have very — you know, their standards are nothing. But they — in the meantime, they can undercut us on price. So it's very hard on our business.

This leads to the next breadcrumb — the claim that China is doing nothing to tackle air pollution, including the carbon dioxide emissions that are driving up global temperatures. This is false as well. As Reuters reported last January:

China is likely to have surpassed Germany in the fourth quarter [of 2015] as the country with the most solar capacity, despite missing its target for 2015, industry data showed on Thursday.

And in March, MIT Technology Review ran a story under the headline, "China Is on an Epic Solar Power Binge." The story points out that:

China now has 43.2 gigawatts of solar capacity, compared with 38.4 gigawatts in Germany and 27.8 in the United States.

This probably is no flash in the pan. China plans on tripling its solar capacity by 2020. According to the Tech Review story:

That will bring the country’s installed solar power to more than 140 gigawatts. To put that in context, world solar capacity topped 200 gigawatts last year and is expected to reach 321 gigawatts by the end of 2016.

China is even working on policies intended to lead to a carbon tax, to help it meet its obligations under international climate change agreements — including the Paris Agreement of December 2015. In fact, four Chinese government agencies have drafted a new law called the "Environmental Protection Law of the People's Republic of China." According to a paper published last year in the journal World Energy Law & Business, this law:

Donald Trump could have argued that China should do more on climate. But his claim that "China does not do anything to help climate change" is a pants-on-fire falsehood. The trail of fact-checking breadcrumbs leads to many more falsehoods as well. I'll leave you with one example on another environmental issue: drought in California. Back in June, during a rally with his supporters in Fresno, Trump suggested that there has been no drought. In the video below, fast forward to 22 minutes in and listen for yourself. 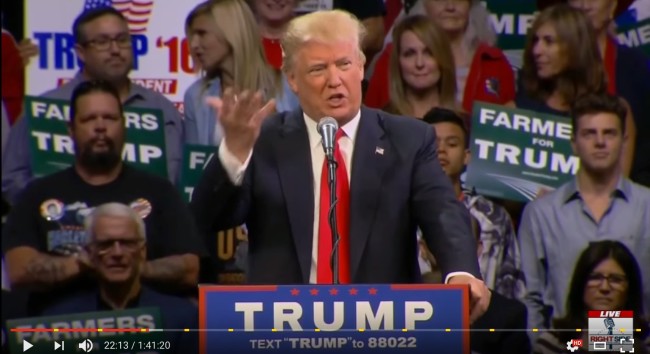 Click on this screenshot then fast forward to 22:00 minutes for Donald Trump's comments on drought in California. Here's a transcript of what he said:

You have a water problem that is so insane, it is so ridiculous, where they are taking the water and shoving it out to sea. And I just met with a lot of the farmers who are great people, and they are saying we don't even understand it, they don't understand it, nobody understands it. And I've heard this from other friends of mine in California where they have farms up here and they don't get water. I said, Oh that's too bad, is it a drought. No we have plenty of water. I said, What's wrong? Well we shove it out to sea. And I said, Why? And nobody even knows why. And the environmentalists don't know why. Now, they're trying to protect a certain kind of 3-inch fish. But... [Boos erupt.] No no, think of it. So nobody even knows why. And by the way even the environmentalists don't know why.

This is a complex and highly contentious issue, so bear with me here as I sort it out. First, it's patently absurd to claim that "nobody understands" what's going on in California. And what's going on is undeniable: California has been experiencing a drought of epic proportions. One study has shown it to be the most severe in 1,200 years. Many California reservoirs were at least partially replenished this past winter by El Niño enhanced rains. But according to the U.S. Drought Monitor, 83.6 percent of the state is still in drought, and almost 64 percent remains in severe to exceptional drought: 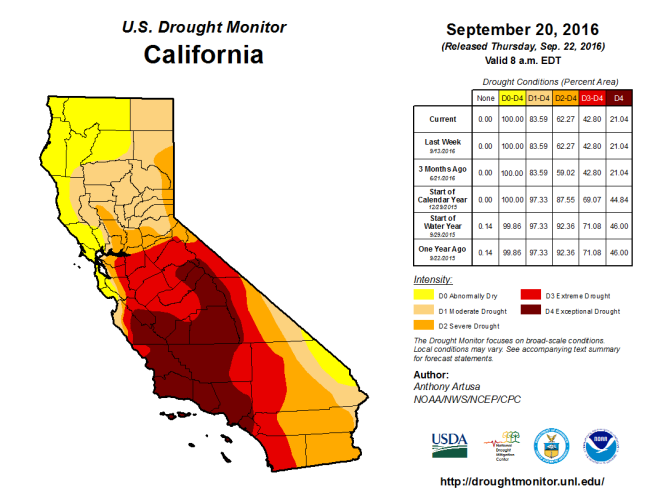 Source: U.S. Drought Monitor At the same time, large amounts of fresh water that could have gone to agriculture from the Sacramento Delta — the "beating heart" of the state's water system, says U.S. Davis biologist Peter Moyle — have been allowed to flow out to sea even during the drought. The reason? To protect a 3-inch fish species threatened with extinction called the delta smelt. A widely circulated Wall Street Journal column published last year claims that it amounts to 1.4 trillion gallons of water each year since 2008. The column provided no source for this number, and I've had a difficult time documenting it. Let's just assume the number is accurate. That is certainly a lot of water. But we need to put it in perspective. An estimated 63 trillion gallons of water were lost to the drought throughout the western United States between 2013 and mid-2014 alone, as reported in Quartz, based on a study published in the journal Science. The severe lack of water falling to the ground in California has actually caused the mighty Sierra mountains to rise up, as if the weight on a spring has been reduced. According to precise GPS measurements, the mountains rose 15 millimeters in places, or more than a half inch — in just one and a half years. When mountains are rising because of a lack of precipitation, it's obvious that easing California's undeniable water woes will be no simple task — no matter what Donald Trump or any other politician may say. Without question, the political issues raised by the drought, the laws and regulations intended to protect species, and the struggles by governments and stakeholders to find a balanced approach to allocating water during a time of extreme shortage, are all very real and knotty. This is especially true when water that's being allowed to flow out to sea does not appear to be forestalling the extinction of the Delta smelt. The species declined from an estimated 112,00 fish in the Sacramento Delta in 2015 to an estimated all-time low of just 13,000 this year. As Peter Moyle, the U.C. Davis biologist, puts it, "Today the smelt are on the verge of extinction. They will probably disappear in the next few years." A national politician like Donald Trump could help us get out of the fixes we're in with climate change, energy production, and issues like drought and endangered species. Unfortunately, that doesn't seem to be on his agenda.