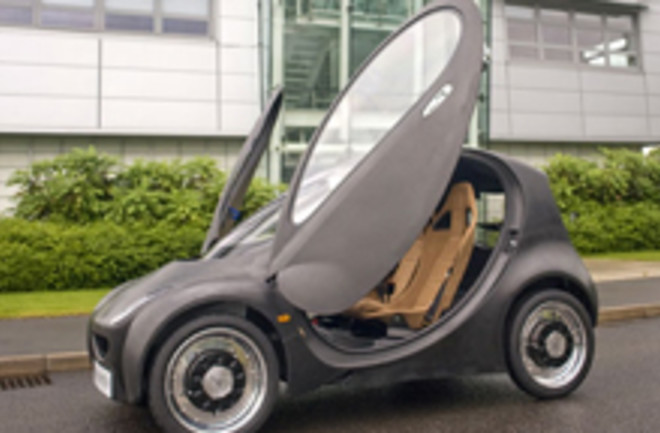 The newest attempt at a viable hydrogen-powered car is a tiny two-seater that should have early adopters tootling around the United Kingdom next year, according its manufacturer, a startup company named Riversimple. While momentum has recently shifted away from hydrogen cars and back towards electric vehicles, company executives say their Riversimple Urban Car meets the challenges posed by hydrogen fuel cell technology.

Its makers claim that by starting from scratch to build a small, efficient car they can make it commercially viable more quickly than the major auto manufacturers experimenting with adapting more conventional cars to hydrogen [New Scientist].

A prototype of the light-weight city car was unveiled today in London. Riversimple executives drove up in the vehicle, which has a top speed of 50 miles an hour and can travel about 200 miles before refueling with liquid hydrogen. The car is packed with novel approaches to car design, but company founder Hugo Spowers says it's the business model that really sets Riversimple apart. Users willl lease the car for an estimated $315 per month, a price that includes the cost of hydrogen fuel and any repairs.

The company asserts that in the leasing model, the vested interest for the manufacturer is in producing long-lasting, fuel-efficient, high-quality products [BBC News].

is driven by four electric motors – one in each wheel.... Coupling the motors directly to the wheels in this way makes it possible to recoup as much as 50 per cent of the energy that would be lost to friction using conventional brakes. The [car] doesn't have a battery, but relies instead on a bank of ultracapacitors, which are able to take on and release energy much more rapidly, and provide most of the power to get the car moving [New Scientist].

In yet another innovation, most of the car's engineering designs will be offered up to the world via the 40 Fires Foundation. By making their designs "open source," Spowers says the

designs can be adjusted for local markets, using locally sourced parts or materials. The agreement will be such that if the designs are improved by a local manufacturer, those improvements will be sent back, so that what the company refers to as its "network of manufacturers" can contribute to the overall development of the product line [BBC News].

If the company creates a few competitors in the process of giving away their ideas--well, competition is healthy, says Spowers. Riversimple seems to be bucking the trend on green technology: In the United States, the Obama administration recently cut off federal funding for research on hydrogen vehicles, arguing that the technology wouldn't be commercially viable for decades. But

Spowers disputed the notion that widespread hydrogen technology was a long way off. "I agree the passion is swinging away from hydrogen, but the reason is people are sceptical of the near-term possibilities of hydrogen vehicles – people are still clear that hydrogen is the end-game." The Riversimple urban car, he said, proved the technology was available now [The Guardian].