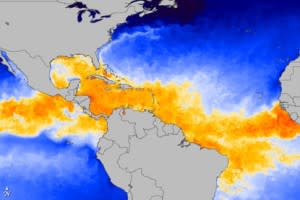 And no, I don't mean sexy. This is a NASA image from the start of hurricane season, showing the sea surface temperatures in the tropical Atlantic and especially in the main hurricane development region. I got the image from this great analysis over at the WWF Climate Blog, which is mainly devoted to summarizing a recent congressional briefing on why we very likely have a really bad hurricane year to look forward to. Some observations that emerged from that meeting:

* We've never had a pre-season forecast of 23 storms before. Let's hope that is an overshot, rather than an undershot.

* The Atlantic is even hotter than it was before the devastating 2005 hurricane season.

* Oh yeah, and there's oil out there. (The title of the briefing was "Hurricanes and Oil Will Mix: Managing Risk Now.")

How much of the Atlantic's current, alarming temperature has to do with global warming? Well, listen to Greg Holland of the National Center for Atmospheric Research:

When asked about the degree to which rising greenhouse gas (GHG) concentrations in the atmosphere were contributing to the trend of rising sea surface temperatures in the tropical Atlantic Ocean, Holland said the temperatures could not be explained without accounting for rising GHG concentrations. He said that while some researchers thought the rising GHG levels might account for 60-80% of the temperature anomaly, he estimated that about half was due to rising GHGs.