The Social Legacy of Lead Poisoning is...?

Despite the charges in some quarters that I indulge in "hippy punching," (code for those challenging environmentalist dogma or climate hyperbole), I've long been an admirer of muckraking journalism. One of my early formative experiences to the genre came when I was a boy growing up on Long Island in the 1970s. I attended a talk by Newsday's legendary investigative journalist Bob Greene. I remember listening in rapt awe as Greene described some of the exposés that he and his Newsday team published. This was part of the rebirth of a new muckraking era in journalism--Woodward & Bernstein were taking down a president, Seymour Hersh was revealing war atrocities in Vietnam, and other crusading upstarts, like Mark Dowie, were making their mark with a new progressive magazine. Naturally, I became a big Village Voice reader (when I wasn't reading Cracked or Mad magazine). Today, the Voice is a shell of its old self, but in in its heyday (the 1960s and 1970s), it had a big political impact in New York City. One of its long-time reporters who I (and many) came to deeply admire was Jack Newfield. The Brooklyn born and raised reporter broke his share of big stories, which he relates (and much more) in his fantastic 2002 memoir, Somebody's Gotta Tell It. His first journalistic crusade, he recalls, "was against lead poisoning," in 1969. Over a span of four consecutive months that year, Newfield wrote five major articles for the Voice on the problem, which was predominantly affecting minorities in housing projects, where lead-paint filled wall plaster was peeling off. In his memoir, Newfield writes:

The campaign against lead poisoning became a model for the rest of my career: Pick an issue. Study it. Make yourself an expert so you won't make any stupid factual mistakes. Figure out who the decision makers you want to influence are. Name the guilty men. Make alliances with experts. Combine activism with the writing. Create a constituency for reform. And don't stop till you have achieved some progress or positive results."

There is much to be said for this approach, so long as one can keep a level head and not succumb to blind zealotry. After all, Newfield's determined reporting on lead poisoning--along with that of other journalists and the activists they wrote about--helped raise awareness that eventually resulted in reform. Leaded gasoline was banned in 1976 and lead paint was banned in homes in 1978, though contamination persists. Now let's fast-forward to today and an ambitious Mother Jones article by Kevin Drum that is getting a lot of attention. As science journalist Deborah Blum summarizes in her analysis,

the story delves into research that consistently maps out a connection between lead exposure and crime rates.

Blum admires the breadth of the story (and considers it an important reminder of a legacy still being felt) but she also politely questions some of the causal links that are at the heart of Drum's piece. I think a lot of folks are still digesting his story. I know I am. Meanwhile, some excitable types are leaping on it, while others are cautiously taking its measure. At the very least, the story is worth reading and I'm glad to see it's provoking discussion. 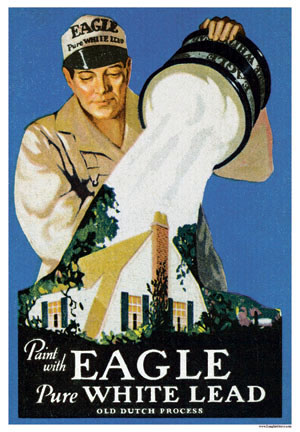