The Sand Fire near L.A. has doubled in size, and with dry, gusty winds, extreme fire behavior is forecast today 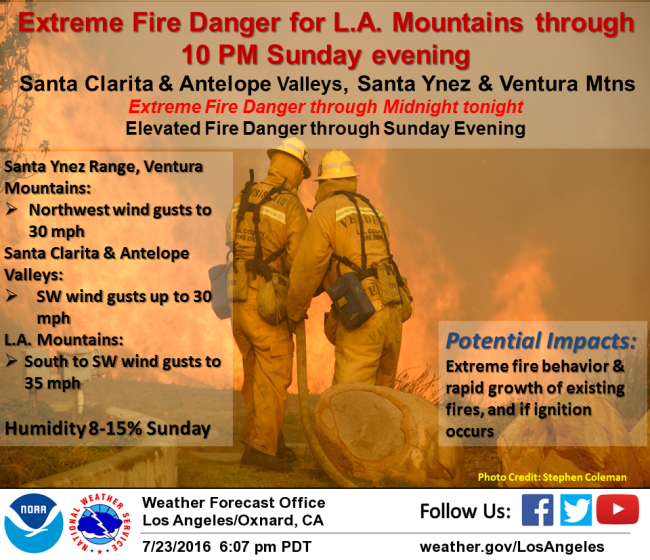 With temperatures up to 97 degrees, humidity down at just 10 percent, and winds gusting as high as 30 miles per hour, the weather forecast today is not what firefighters battling the Sand Fire near Los Angeles might have hoped for. As the graphic above from the National Weather Service in L.A. shows, extremely dangerous fire behavior is in the offing today.

Make sure to click on the link above to watch one of the most amazing time-lapse animations I've ever seen. It shows the Sand Fire blazing at night in the hills outside of Santa Clarita. 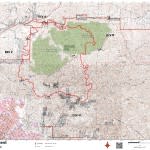 Map of the Sand Fire, as of Sunday morning, July 24, 2016. (Source: InciWeb) The fire has doubled in size to 22,000 acres over the past 24 hours, and it is just 10 percent contained, according to the Incident Information System (InciWeb). More than 1,673 firefighters are battling the blaze. Their resources include 122 fire engines, 15 helicopters and eight bulldozers. (For a map of the blaze as of Sunday morning, click on the thumbnail image at right.) Fifteen homes have been evacuated. Unfortunately, 18 have been destroyed so far. There is also a report of a scorched body of a deceased man being found in a car sitting in the driveway of a home in Santa Clarita. The cause of death has not yet been confirmed. Here's what the fire looked like from space yesterday, as viewed by the GOES-West weather satellite: https://youtu.be/OSL1aCkaoaQ In the animation (which loops several times), note the big plume of smoke that seems to explode upward toward evening (before the scene goes black). I can't tell for sure, but on imagery from the Suomi NPP satellite it looks to me like this could be an example of a pyrocumulus, or fire cloud: 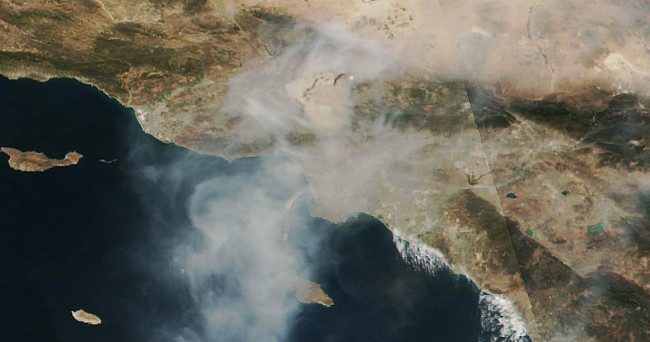 A cloud of smoke boils up from the Sand Fire just north of Los Angeles, as seen in this image acquired by the Suomi-NPP satellite on Saturday, July 23, 2016. (Source: NASA Worldview) Pyrocumulus clouds are similar to thunderstorm clouds. Both form from rising air currents. In the case of a pyrocumulus cloud, the air rises as a result of intense heating from a fire at the surface, carrying water vapor and ash upward. As the vapor rises, it can condense onto ash particles, forming cloud droplets. 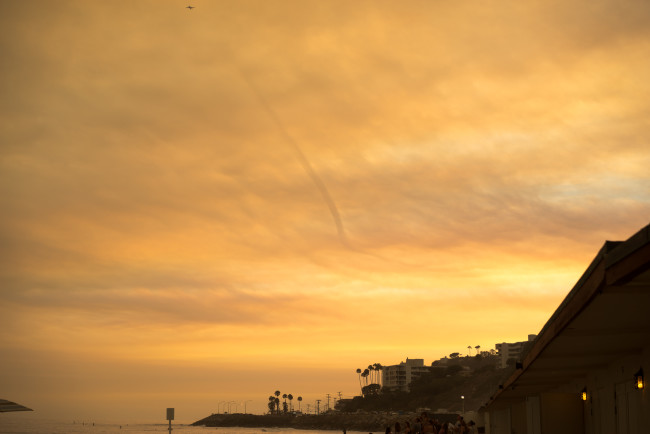 With smoke in the air along the coast in L.A., the skies turned yellow-orange at sunset on Saturday, July 24. Note the airliner in the upper left and its contrail . (Source: HankWright.com) Large portions of the Los Angeles area have been blanketed in smoke from the fire, as seen in the photo above shot by my friend Hank Wright. (See more of his work at HankWright.com) https://twitter.com/wilw/status/757001404103872512 Today, winds will be blowing from the Southwest, helping to blow the smoke away from the city: 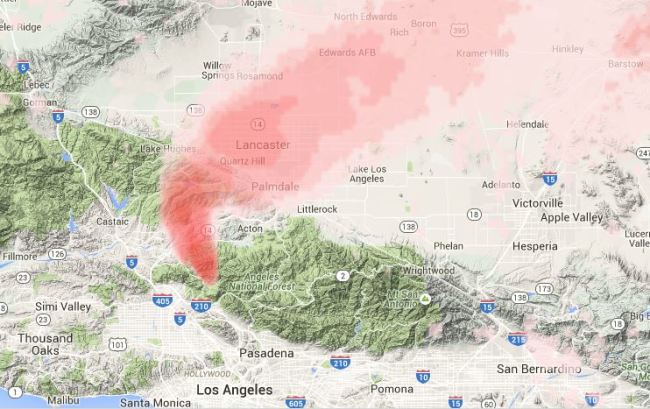 The Sand Fire smoke forecast for late afternoon Sunday. (Source: California Smoke Information) This should help firefighters who are struggling in tough and dangerous conditions. Meanwhile, to the north, along the coast south of Carmel, the Soberanes Fire continues to blaze out of control. It has grown to 10,262 acres, up from 6,500 acres yesterday, and the fire is just 5 percent contained. About 1,500 homes have been evacuated in that incident.