The Ozone Hole Is Finally Healing

Susan Solomon first identified the hole in the ozone layer in 1986. 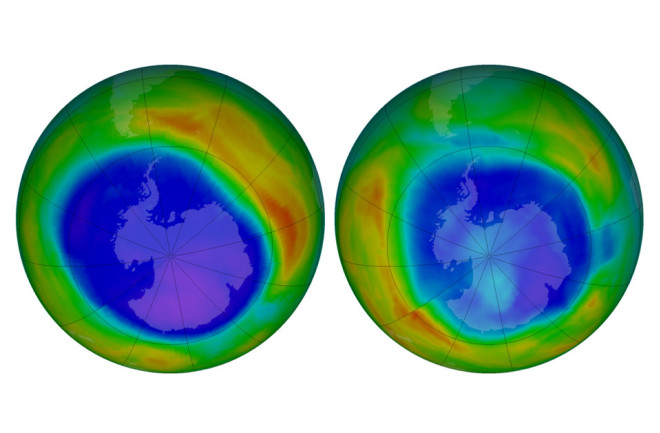 The hole in the ozone over Antarctica, depicted in September 2000 (left) and September 2014. (Credit: NASA Ozone Watch)

This year saw the arrival of rare good news for the environment. The hole in the ozone layer over Antarctica, which allows harmful ultraviolet radiation to penetrate our atmosphere, is finally starting to heal.

Discover spoke with MIT climate scientist Susan Solomon, who not only published research in Science in July showing that the hole is fading, but also discovered why it was there in the first place back in 1986. Her findings paved the way for the 1989 Montreal Protocol, which banned the worst ozone-depleting chemicals, such as chlorofluorocarbons.

Almost three decades later, the ozone hole still hasn’t recovered, but Solomon’s latest work shows conclusively that the protocol is working. The ozone hole’s height and area are shrinking, reducing its extent by 1.5 million square miles since 2000 — and not just due to natural variations.

What have you seen that shows the ozone hole is closing?

What’s happening now is we’re actually able to show some evidence for it getting better finally, due to the changes made globally under the Montreal Protocol to stop making these molecules. So to me, it’s pretty amazing that we can see that.

How much of the healing does the Montreal Protocol account for?

I think it’s about half. The Science paper shows that you can pretty consistently explain about half the decrease in the depth of the ozone hole. And when it comes to the area, it’s even a little more than half.

Are we out of the woods yet?

No, it’s not completely healed; it’s a long way to being back to where it was. It’s not going to heal completely until the middle of the century, but it’s pretty clear that it’s on the road to healing.