Urban planners zero in on the areas of the Gulf Coast most vulnerable to the threat of extreme weather. 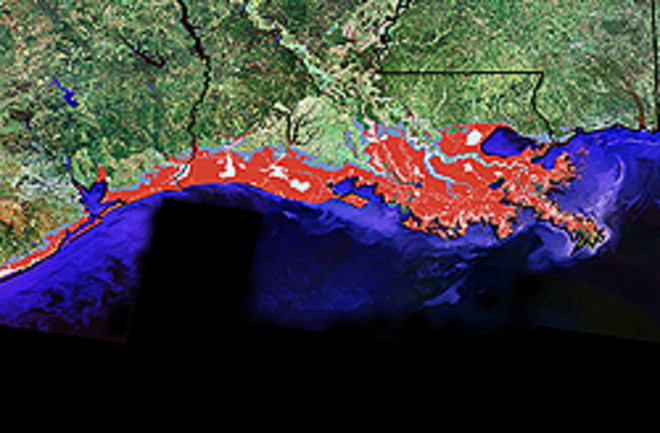 The red areas, including New Orleans, lie less than four feet above sea level and could be threatened by storm surges, flooding, and rising sea levels.

As hurricane season began on the Gulf Coast this year, there were community meetings just about every night, says New Orleans resident Rob Wallace. With the National Oceanographic and Atmospheric Administration predicting four to six hurricanes of category 3 or more, residents have reason to worry. "What Katrina made clear is that we have to take care of ourselves," Wallace says.

Wallace is senior program coordinator for the Katrina Environmental Research and Restoration Network, an interdisciplinary group of researchers affiliated with the local Tulane and Xavier universities. The group formed with the goal of not only understanding Katrina's social and environmental impact but also of publicizing the risk around the world to low-lying urban communities. At first Wallace was surprised at the number of social scientists involved. Then he came to realize that the storm ripped apart communities as well as schools and hospitals and that social scientists are working to study the impact and help residents recover.

Another group of social scientists, the National Consortium to Map Gulf Coast Ecological Constraints, formed to contribute in a different way. One of the members, senior project coordinator Jim Sipes of the Atlanta office of EDAW, a landscape architecture and planning firm, exploited existing data to model which low-lying regions are most at risk from storm surges and flooding and where the most vulnerable populations are concentrated.

The maps, Sipes says, help everyone visualize the problem. "I want to make it democratic. Communities can see the problem. It's up to them to decide what to do." The images can help set priorities in evacuation plans, and planners can make better-informed decisions about where and how to spend money and develop land.

Many of the factors that increase the risk of storm-related damage are indisputable. A tripling of the population along the Gulf Coast since the 1950s is one, and the loss of hundreds of square miles of surge-buffering wetlands is another. Natural compression of the region's sandy soil over time has also contributed to land loss. In June, a report by the U.S. Army Corps of Engineers acknowledged that some levees protecting New Orleans were lower than they should have been due to soil settling and inaccurate measurements.

Meanwhile, Sipes says he's surprised that others haven't done this kind of modeling, particularly in the Caribbean. "We do a lot of planning there, and it could help people make decisions about land-use patterns and risk, architectural standards, and handling water and waste."