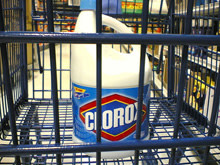 It's water! (Albeit with a little salt and electrolysis.) Electrolyzed water is the new cleaning agent of choice for the housekeeping staff at the Sheraton Delfina in Santa Monica. Employees have abandoned their bleach and ammonia to clean toilets and sinks with an elixir made—on site—from table salt and tap water. The salt water is then zapped by an electrolysis machine with low-voltage electricity, which converts the sodium ions into sodium hydroxide, an alkaline liquid with the cleaning abilities of detergent. Meanwhile, the chloride ions become hypchlorous acid, also known as acid water, a powerful disinfectant. The "magic" water is also being used by the kitchen staff at the Sheraton to disinfect produce, which they say now lasts longer. A New York poultry processor uses it to kill salmonella on chicken carcasses, and it is used to clean the floors of a Michigan prison, leaving inmates without access to potentially lethal cleaners. In Japan, it is sprayed on sushi to kill bacteria, sterilizes doctors' equipment, treats foot fungus, and does the task, normally left to chlorine, of disinfecting swimming pools. It is also put down Russian oil wells to kill microbes, used as a treatment for burn victims in Europe, and is now being used to sanitize drinking water in parts of Latin America and Africa. Electrolyzed water is said to be ten times better than bleach for killing bacteria, capable of killing anthrax spores, and is credited with reducing employee injuries from chemicals—and it costs less than a penny a gallon. No wonder the Sheraton staff calls it "el liquido milagroso"—the miracle liquid. Related Content: Disco: "Liquid Wood": A New Plastic That Grows on Trees Disco: Cheap "Liquid Glasses" Bring Clear Vision to the Poor