The Hole in the Antarctic Ozone Layer Is Starting to Heal 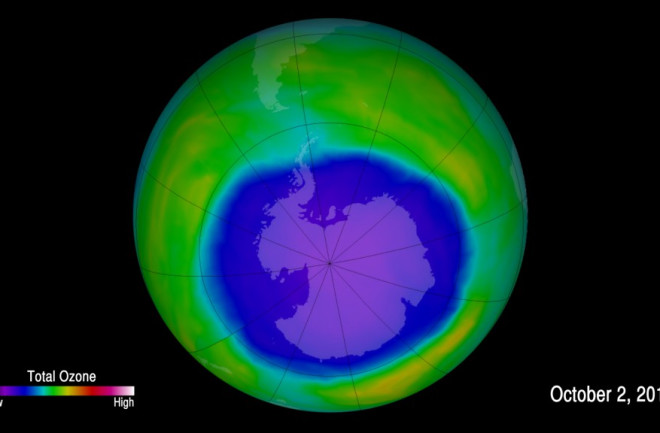 A false-color image showing ozone concentrations above Antarctica on Oct. 2, 2015. (Credit: NASA/Goddard Space Flight Center) There may finally be some good climate news. A paper published today in Science details the the first strong evidence that the hole in the ozone layer is beginning to heal. In 1987, the Montreal Protocol banned the class of ozone-gobbling chemicals called chlorofluorocarbons (CFCs) in developed countries around the world, and it appears that the policy is, perhaps, starting to pay off. Since 2000, the hole has shrunk by some 1.5 million square miles and could close completely by the middle of the century, according to the researchers.

Past the Tipping Point

Led by Susan Solomon from MIT, the team of researchers combined data from satellites and weather balloons stationed in Antarctica to measure levels of ozone and CFCs in the atmosphere. They found that the levels of CFCs have stopped increasing, and there are signs that the ozone layer is trending toward its pre-1980 benchmark levels. They say that this trend matches well with computer simulations that predict ozone layer health given reduced CFC emissions. The North America-sized gap in the ozone layer hovers invisibly over the Antarctic, serving as a constant reminder of our influence on the environment. The ozone layer protects life on earth from the sun's harmful UV radiation, which would damage our eyes and skin if allowed to shine through unfiltered. According to the United Nations Environment Programme, banning CFCs could prevent 2 million cases of skin cancer annually by 2030.

In the study, Solomon analyzed data from the year 2000 to 2015, focusing on the months of September and October, when the hole in the ozone layer reaches its greatest extent. Cold air in the Antarctic aids in the formation of stratospheric clouds, which, along with sunlight, are necessary for chlorine to react with and destroy the ozone layer. Solomon showed that as chlorine levels in the ozone layer in September — when the hole starts to open — started to fall, the rate at which the hole grew also slowed. Data for October, the month when the hole is traditionally largest, are still too scattered for the researchers to identify a trend in an increase of ozone levels. The observed size of the hole in the ozone layer during September, however, decreased reliably between 2000 — when the hole reached its greatest extent — and 2014. This provides strong evidence that the wound is closing and headed in the direction of recovery. The researchers published their paper Thursday in Science.

Causes Hard to Pin Down

Controlling for everything but the influence of reduced CFCs revealed only a small upward trend in increased ozone levels. Incorporating other factors into the model left Solomon with wild year-to-year swings in ozone levels that are still largely unexplained. Volcanoes are one clear factor in regulating ozone levels, but seasonal weather patterns and other so-called "dynamical factors" also influence ozone levels in ways that researchers still don't entirely understand. In 2015, for example, the hole grew to record size, but Solomon attributed that to the Calbuco volcano eruption in Chile. Paul Newman, the chief scientist for atmospheric sciences at NASA's Goddard Space Flight Center, agrees that things appear to be headed in the right direction. "We see that things are getting better … we understand why things are high, we understand why things are low, but we don't understand why there’s a trend in the dynamics," says Newman. "Our models tell us … that if you reduce ozone-depleting substances, the ozone hole will start going away — there’s no controversy about that," says Newman. "It’s the attempt to attribute the trends that we see to ozone-depleting substances that’s tough. There’s this dynamical contribution that we don't quite understand yet." The inherent complexity involved in parsing out trends in meteorological data makes it difficult to pin down exactly how the Montreal Protocol has affected this swing in the right direction. But what is clear is that the hole in the ozone layer, which was once growing at a worrying pace, has begun to show signs of healing. And that's something we can all celebrate.