The heat streak goes on: NASA finds that last month was the warmest September on record

With that in mind, I have an urgent request for Chris Wallace, moderator of the next debate: please ask Donald Trump about climate change 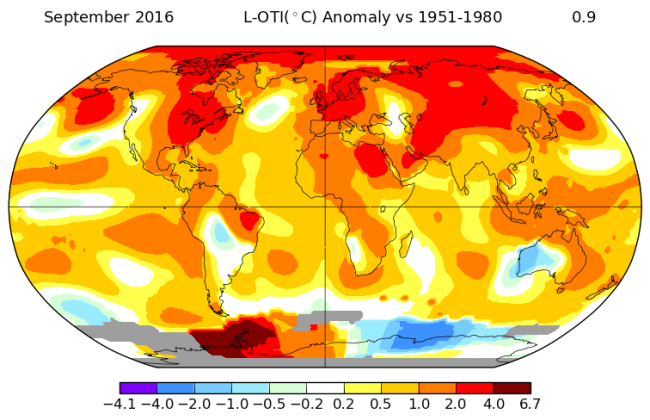 In this temperature anomaly map, yellow, orange and red colors show regions of the world that were warmer than the long-term average in September. (Source: NASA GISS) Although it is one of the biggest challenges facing humanity, climate change has barely figured in the past two presidential debates. Now, we have news that by all rights should finally prompt at least one question on the subject at the third and last debate, scheduled for this coming Wednesday: This past month was the warmest September in a record dating back to 1880, according to data just released by NASA's Goddard Institute for Space Studies. The globe was .91 degrees C, or 1.638 degrees F, warmer than the long-term average for September. That means 11 of the past 12 months have been the warmest on record, by NASA's reckoning. (June 2016 was second to June of 2015 as warmest for that month.) And there is almost no doubt that 2016 will go down as the warmest year on record: https://twitter.com/ClimateOfGavin/status/788040889075662848 The prediction, offered today on Twitter by Gavin Schmidt, director of NASA GISS, suggests that warming for all of 2016 could come uncomfortably close to the 1.5 degrees C above preindustrial times that the Paris climate accord is supposed to help us avoid. (The accord, by the way, went into force just this past Oct. 4.) Wednesday's debate is the last time that we will be able to hear Hillary Clinton and Donald Trump discuss climate change in a forum together. It's particularly important to ask Trump about his views. That's because he has said he would "cancel" the Paris agreement. He has also called climate change a "hoax," and argued that the "concept of global warming was created by and for the Chinese in order to make U.S. manufacturing non-competitive."

This flies in the face of science, as well as a robust consensus among climate scientists. In September, for example, 376 members of the National Academy of Sciences, including 30 Nobel laureates, published an open letter describing the serious risks they perceived from climate change. The letter also warns of severe, long-lasting consequences if the United States were to opt out of the Paris agreement. This was just the latest expression of a robust scientific consensus on climate change. Last May, a survey provided additional evidence of the strength of that consensus. The authors, Dennis Bran and Hans von Storch, used a standard survey response format in which respondents answer questions based on a scale of 1 to 7. On this scale, 4 can be seen as indicative of ambivalence, whereas 7 generally means "very much." Here are highlights: In the survey, 96.7 percent of respondents said they were convinced that climate change is occurring now. (This was the percentage of respondents who answered 5 or above.) Nearly 80 percent of those answering this question chose '7', meaning they were "very much convinced." Moreover, an overwhelming majority of the climate scientists surveyed indicated that human activities are implicated in climate change: 87.35 percent said they were convinced that "most of recent or near future climate change is, or will be, the result of anthropogenic causes". Three quarters of respondents answered '6' or '7', with the latter number again meaning "very much convinced." Just how much of a threat does climate change pose in the view of these experts? Nearly 86 percent of respondents said they were convinced that "climate change poses a very serious and dangerous threat to humanity." With this in mind, I have a question that I'd Chris Wallace, Wednesday night's debate moderator, to pose to Donald Trump. Here it is:

Mr. Trump, the science is very clear: The globe is warming. And this is already causing changes to the climate, right now — including sea level rise, an increase in the frequency and intensity of heat waves, and a rise in some other kinds extreme weather events, including heavy rainfall episodes. Research also shows that emissions of heat-trapping carbon dioxide from fossil fuel burning are largely to blame. Moreover, this isn't just the view of a handful of researchers. Recent research shows it is the consensus view of literally hundreds of climate scientists around the world. With this in mind, why have you not accepted the scientific evidence, and the overwhelming consensus among climate experts, that climate change is real, mostly human-caused, and a threat to all people on the planet?

I don't have high hopes that Wallace will pose any question like this — because of how he says he views his role: "Basically, you're there as a timekeeper, but you're not a participant." But he also says that his job is to "make sure that they engage in the most interesting and fairest way possible." And that does give me at least a sliver of hope that he'll do his job as a journalist and ask a question that is of great interest to billions of people around the world.