The heat goes on: This past April was second warmest in records dating back to 1880 — as were February and March

But with the monster El Niño of 2015/2016 far back in the rear-view mirror, temperatures in 2017 are running somewhat lower than last year 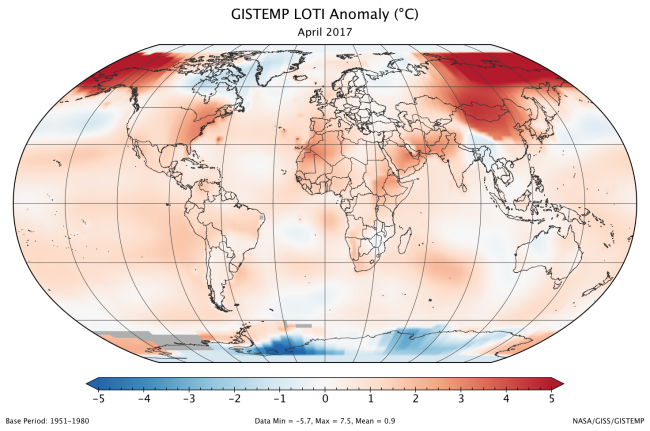 A map of temperature anomalies in April 2017 shows that central and northeast Asia, as well as Alaska, were much warmer than the 1951-1980 base period. (Source: NASA GISS) NASA has come out with its monthly analysis of global temperatures, and the results are notable, if not terribly surprising: Last month was the second warmest April in 137 years of modern record-keeping. Last month beat out April of 2010 by just a small amount to achieve that distinction, according to the analysis by NASA's Goddard Institute for Space Studies. It was second only to April 2016, which shattered the record for warmest year, thanks in part to a boost from El Niño. Temperatures have moderated just a bit from the astonishing highs of 2016, as you can see in the following graph charting how the global average surface temperature has varied from that of the pre- and early-industrial time of 1880 to 1920: 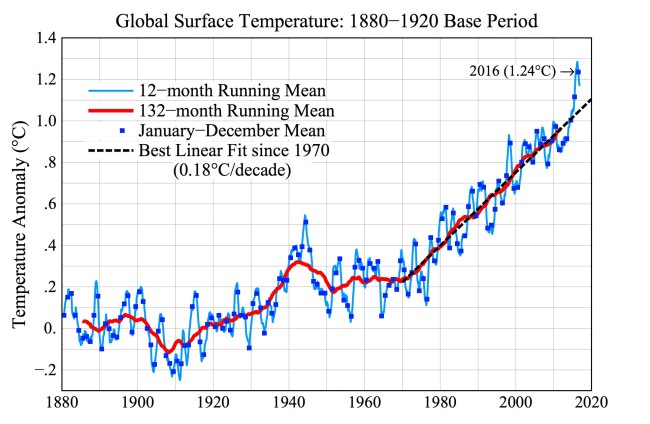 Source: NASA GISS The graph, which takes us through April, shows the 2016 peak and subsequent modest fall-off so far this year. Also noteworthy is the pattern. There are obvious short-term variations, including some periods of slower warming. But overall, since 1970 the globe has experienced an unambiguous long-term warming trend. Although we're clearly off last year's peak, the globe continues to be plenty warm. January was the third-warmest such month on record. Since then, February and March, like last month, were second warmest respectively. 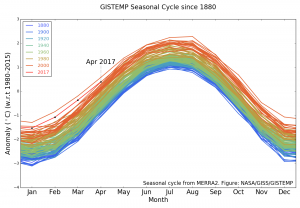 This graph shows how monthly global temperatures have varied from the 1980-2015 average. (Source: NASA GISS) To see how this year has compared month by month with previous years, click on the graph at right. The most intense warmth anomalies during April were in the high north, as well as central Asia. Alaska was particularly warm last month (following a relatively cool March), as were Russia's Arctic reaches. Overall, the Arctic continues to warm at twice the average rate of the rest of the globe. In fact, during 2016, land areas of the Arctic experienced the highest average temperature in the observational record, with a 6.3 degree Fahrenheit increase since 1900, according to the NOAA-sponsored Arctic Report Card. “Rarely have we seen the Arctic show a clearer, stronger or more pronounced signal of persistent warming and its cascading effects on the environment," said Jeremy Mathis, director of NOAA’s Arctic Research Program, quoted in a NOAA news release. NASA's monthly analysis "is assembled from publicly available data acquired by about 6,300 meteorological stations around the world, ship- and buoy-based instruments measuring sea surface temperature, and Antarctic research stations," according to a summary released on May 15. NOAA's independent analysis of the state of the global climate during April 2017 should be released very soon.