The Godzilla El Niño now drenching California is getting a boost from another potent climatic phenomenon: 'MJO'

Expect continuing California rains, and the East to turn much colder

A phenomenon known as the Madden-Julian Oscillation, or MJO, has been moving from west to east across the tropical Pacific Ocean, and now seems to be enhancing the effects of the already powerful El Niño in progress. The animation of infrared satellite images above shows areas where enhanced storminess from the migrating MJO is occurring (as indicated by other remote sensing data). The blue and green colors with embedded splotches of bright yellow and red are indicative of higher levels of atmospheric water vapor. Duller orange and red indicates less water vapor. (Source: RAMMB/NOAA/NESDIS) Godzilla El Niño stormed ashore in Southern California today, offering up a good drenching that has caused flooding, closed roads, and transformed the usually trickling Los Angeles River into a raging torrent. Today's fast-moving tempest will be just the first in a parade of storms this week. An El-Niño-energized subtropical jet stream promises to help deliver at least two more rounds of copious rainfall to the drought-plagued region between now and Sunday.

SEE ALSO: Had enough meteorological mayhem? Sorry, thanks to El Niño, things are likely to get even worse

All of this was expected from the El Niño that has been growing in the tropical reaches of the Pacific Ocean for months. But now, it seems to be getting a boost from another climatic phenomenon: the Madden-Julian Oscillation. The active phase of the MJO is moving eastward through the tropical Pacific, and it is helping to enhance El Niño there. "We're essentially seeing a mash-up of both El Niño and the MJO at the moment," says Michelle L’Heureaux, a meteorologist with the National Oceanic and Atmospheric Administration. Wherever MJO goes, it tends to increase storminess. And it's doing precisely that right now in the central tropical Pacific Ocean — where El Niño has been doing the same thing. This is very far from California. But the weather that happens there doesn't just stay there. It tends to influence events much farther afield. What impacts on U.S. weather can we expect from the El Niño-MJO mashup? Let's consider precipitation first. But before we do, an important caveat from L’Heureaux is in order: Predicting how a passing MJO will influence rainfall patterns in California and elsewhere during an El Niño episode is difficult. That's because detailed data on mashups like the one now occurring are relatively sparse. And they don't produce a clear picture. With that cautionary statement in mind, consider the most recent experimental outlook from the Climate Prediction Center, for January 16 through 29:

Areas in brown indicate where precipitation is likely to be below normal. And that broad swath of green shows where the odds for greater than normal precipitation are enhanced. This looks something like a typical El Niño pattern. But to produce the outlook, the CPC took into account both the ongoing El Niño and the MJO event. So MJO is definitely playing a supporting role here. Remember: This is about odds, not certainty. So we'll just have to wait to find out how things actually play out. But there is one thing you can probably take to the bank: a continuing parade of storms hitting California, helping to ease the drought but also bringing damaging floods and landslides. What about the temperature pattern we're likely to see with a mashup of MJO and El Niño? "That's a lot more clear to us," L’Heureaux says. Here's what the experimental outlook for temperature between January 16 and 29 looks like:

Check out that big splotch of blue! Here, the odds point to colder-than-normal temperatures. At this point in the MJO's evolution, "it tends to drive below-average temperatures in the eastern U.S," L’Heureaux says. That means MJO will likely contribute to a significant shift in conditions for that region of the country. And, in fact, not just MJO. Other climatic factors are also pointing strongly toward pronounced chill in the East. Here's how Mashable's Andrew Freedman described what's coming:

For most of the U.S., the weather of early-to-mid January will be the polar opposite of what it was in December. The East, which roasted like chestnuts on an open fire in December, is looking at multiple shots of cold, Arctic air and potential snowfall events during the next two to three weeks.

And that finally brings us to this question: What is the difference between El Niño and MJO? El Niño is characterized by a warming of the sea surface in the central and eastern tropical Pacific Ocean. Once it emerges, it is essentially stationary, and it causes regional and global impacts for many months. By contrast, MJO is more dynamic and operates on shorter timescales. It is "an eastward moving disturbance of clouds, rainfall, winds, and pressure that traverses the planet in the tropics and returns to its initial starting point in 30 to 60 days, on average," writes meteorologist Jon Gottschalck, L'Heureaux's colleague at NOAA's Climate Prediction Center. For an excellent, detailed explanation of the MJO phenomenon by Gottschalck, go here. 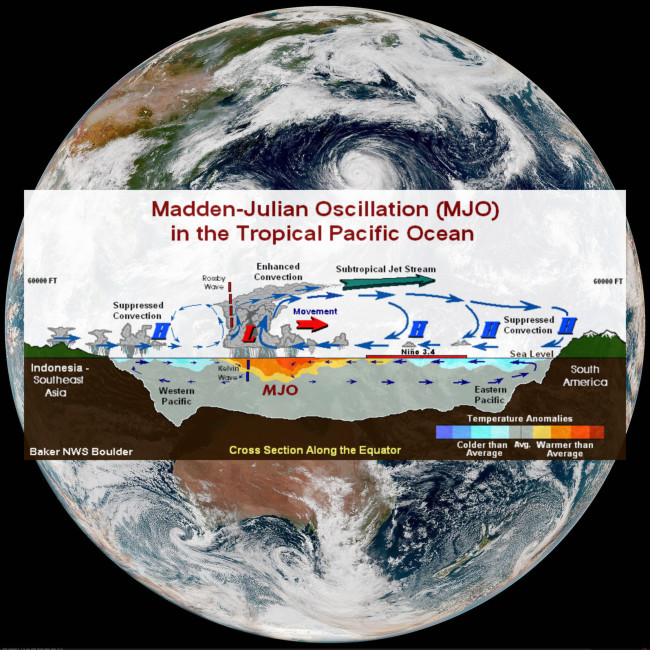 (Earth image: Japan Meteorological Agency. Diagram: Mike Baker, National Weather Service, Boulder, Colorado. Graphics mashup: Tom Yulsman) The graphic above shows the active MJO region after it has moved east from the Indian Ocean, past Southeast Asia, and out toward the central Pacific. In the active MJO region, air currents rise over warm waters, causing clouds to form in big convection cells. Meanwhile, convection activity is suppressed behind and ahead of this area of increased storminess. The active phase of the current MJO is now over the central Pacific, and models are predicting that it will continue to move eastward, at least for a time. After MJO has passed, or dissipated, El Niño will still be exerting it influence. So here is my advice for the next few months: fasten your seat belts...