The Globe is Warming, our Planet is Changing, Here's Why 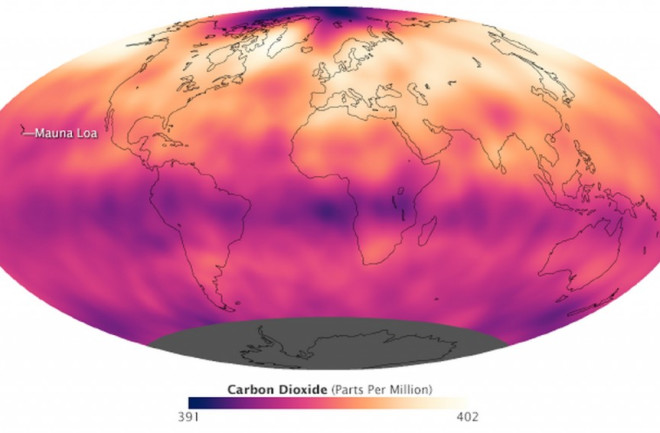 Carbon dioxide in the mid-troposphere, as mapped by the Atmospheric Infrared Sounder, or AIRS instrument, on NASA’s Aqua satellite. (Image: NASA Earth Observatory) A long-awaited report from the Intergovernmental Panel on Climate Change was officially released today. The summary for policy-makers opens with this thumbnail sketch of how our planet has changed:

Warming of the climate system is unequivocal, and since the 1950s, many of the observed changes are unprecedented over decades to millennia. The atmosphere and ocean have warmed, the amounts of snow and ice have diminished, sea level has risen, and the concentrations of greenhouse gases have increased.

While the rise in temperatures has leveled off in recent years...

Each of the last three decades has been successively warmer at the Earth’s surface than any preceding decade since 1850...In the Northern Hemisphere, 1983–2012 was likely the warmest 30-year period of the last 1400 years (medium confidence).

And then there's the punchline that is being widely reported today by media around the world:

It is extremely likely that human influence has been the dominant cause of the observed warming since the mid-20th century.

In that coverage, you'll see a plethora of graphics from the IPCC report itself. And I'm sure I'll be posting some of that in days to come as I have time to dissect the report. But for now, I thought I'd go with something different — a global map of carbon dioxide concentrations in the atmosphere, published yesterday by NASA's Earth Observatory. It's the graphic up top. When the IPCC says "human influence" has been the dominant cause of climate change, they're talking in large measure about carbon dioxide — the greenhouse gas that is having the greatest impact. (But others are certainly important too. Methane, for example.) And the map, based on data from the Atmospheric Infrared Sounder, or AIRS instrument, on NASA’s Aqua satellite, shows how it was distributed around the globe during May in the troposphere, the part of the atmosphere where most weather happens. This is when the concentration of carbon dioxide in the atmosphere nudged above 400 parts per million for the first time in at least 800,000 years, and perhaps as many as 2.5 million years. As the map shows, CO2 is not distributed evenly. There was more above the Northern Hemisphere than in the south. NASA attributes this to the measurements being taken in May, when seasonal plant growth — and thus removal of CO2 from the atmosphere by those plants — had not yet kicked into high gear. And since there's more land area, and thus more plants, in the north than the south, this region dominates the seasonal CO2 pattern. But that's probably only part of the story. The other part is that most CO2-emitting industry, cars, etc. are located in the Northern Hemisphere. One other thing to consider: Since May, CO2 concentrations in the Northern Hemisphere have dropped a bit below 400 ppm. This has occurred as Northern Hemisphere plant growth during the warm season has pulled some of the gas out of the atmosphere. Here's the latest data from NOAA's Earth Systems Research Laboratory:

According to Pieter Tans of ESRL, it will take awhile longer for the global average of CO2 to increase to 400 parts per million — perhaps not until 2016. Stay tuned for more from the IPCC report...