The first of several climate verdicts is in: 2016 was the warmest year on record — as widely expected 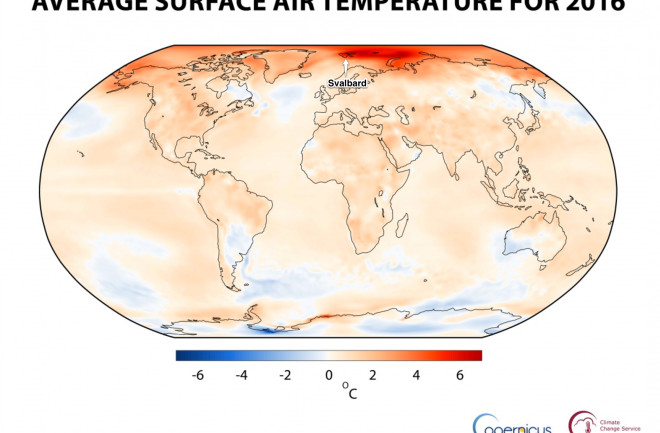 Air temperatures at a height of two meters for 2016, shown relative to their 1981-2010 averages. (Source: ECMWF, Copernicus Climate Change Service) On the heels of a study confirming that there had been no slowdown in global warming, there is now this news: 2016 was indeed the warmest year on record. The analysis was announced Thursday by the the European Union's Copernicus Climate Change Service. Scientists have been predicting for quite some time that 2016 would achieve this dubious distinction.

SEE ALSO: “Might not feel like it today, but 2016 will be the warmest year in the surface temperature records”

The announcement follows preliminary findings in December from the Japan Meteorological Agency also showing that 2016 would be the warmest year. Two U.S. government agencies, NASA and NOAA, will follow soon with their own analyses. While they may differ somewhat in the details, there is no doubt that they will concur about 2016's record-setting status. In its analysis, the Copernicus Climate Change Service found that this past year was warmer than 2015 by close to 0.2°C. "Global temperatures reached a peak in February 2016 around 1.5°C higher than at the start of the Industrial Revolution," according to a press release from Copernicus. As the graphic above shows, the Arctic was especially warm. And no part of the Arctic was warmer in 2016 than the island archipelago of Svalbard, which sits more than 500 miles north of Norway in the high Arctic. In addition to being warmer than any year since record-keeping began on Svalbard in 1911, 2016 brought conditions that can only be described as bizarre. In October, for example, temperatures skyrocketed to 50 degrees F in Longyearbyen, the main settlement. In November and December, temperatures spiked to above 40 degrees F. It is normally uniformly freezing during these months, with temperatures in December that can easily plunge to minus 20. Even more concerning for the people who live there — and who are having to deal with deadly avalanches and buildings sinking in thawing permafrost — is the fact that Longyearbyen had fewer than 200 days with freezing temperatures in 2016. (Also a record.) "We're not just talking about heat records, but numbers that crush everything else measured previously," says Stein Kristiansen of Norway's Meteorological Institute, quoted in a story in Aftenposten. Lest you think that this is only an issue for people living in the high north, take a close look at that map. Very few regions of the globe experienced temperatures in 2016 that were cooler than average.