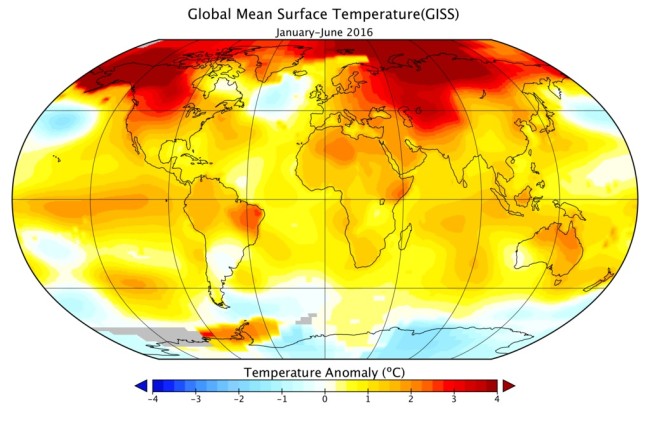 Global surface temperature anomalies for the period January 2016 through June 2016. Higher than normal temperatures are shown in red and lower then normal termperatures are shown in blue. (Source: NASA/GISS) This past month nudged out June 2015 as the warmest on record, according to data just released by NASA. That makes the first six months of 2016 the warmest first half of any year since 1880. June's record warmth also means we've experienced nine months in a row of record setting temperatures. A separate analysis released today by the National Oceanic and Atmospheric Administration also shows that the first half of 2016 was the warmest. By NASA's reckoning, the first half of 2015 was previously the warmest such period on record. "But 2016 has blown that out of the water," said Gavin Schmidt, head of NASA's Goddard Institute for Space Studies, at an online briefing today. Given the torrid start to the year, 2016 is very likely to finish as the warmest year on record. 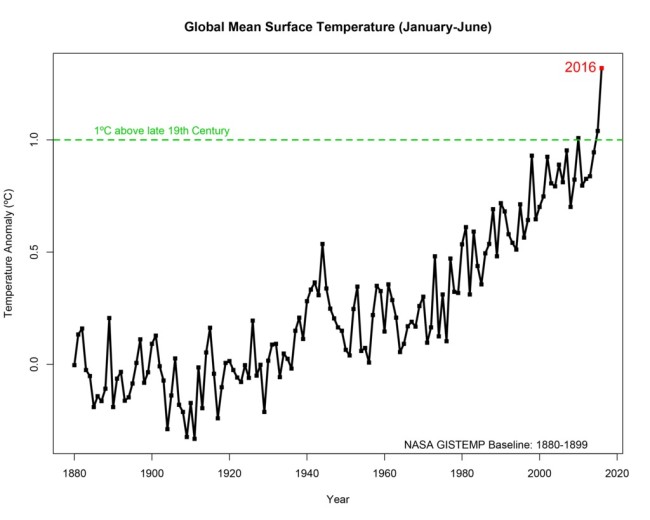 Graph of the global mean surface temperature for the six-month period of January through June of each year from 1880-2016. The numbers show differences from the pre-industrial era, calculated as the average mean surface temperature of 1880-1899. (Source: NASA/GISS) About 40 percent of the record high temperatures during the first half of this year has been due to El Niño, and 60 percent due to other factors, according to Schmidt. Carbon dioxide and other greenhouse gases accumulating in the atmosphere from human activities make up the main, long-term underlying factor. "The attribution of the overall trend is very clear, and that is to greenhouse gases," Schmidt said. "It doesn’t matter whether there is an El Niño or a La Niña. Almost all of the uptick in temperatures we’ve seen since the 1960s is due to greenhouse gases." For the past six months, the warming has been particularly noteworthy in the high north. There has been "very, very strong Arctic warming," Schmidt said. That, in turn, has caused the extent of Arctic sea ice to plummet: 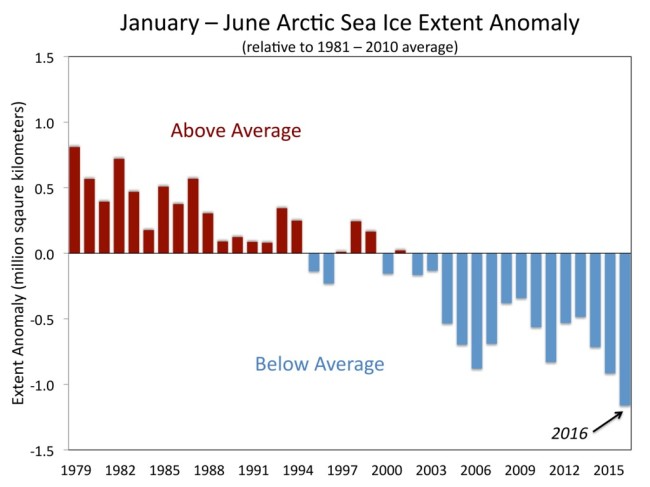 The difference between the 1981-2010 average extent of Arctic sea ice and each year's maximum extent. Years with a larger extent of sea ice are colored red and years with a smaller extent of sea ice are colored blue. (Source: NASA/Meier) Averaged over the first six months, we've seen the lowest sea ice extent in the satellite record, as the graph above shows. Every month except for March set a record. "It has been an extreme start to the year for sea ice," said Walt Meier of NASA's Goddard Space Flight Center. 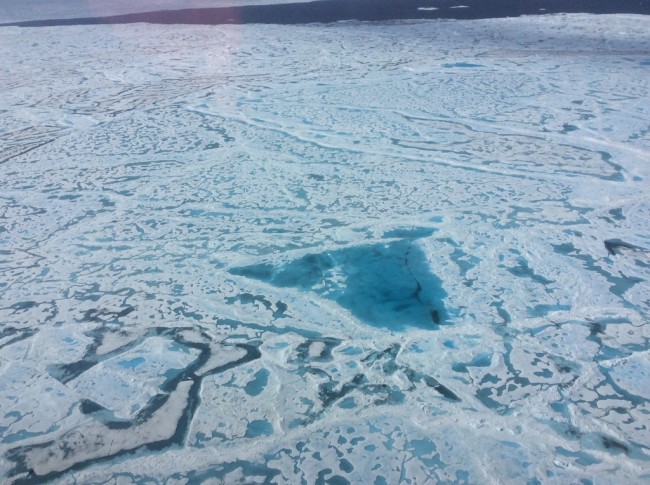 A large melt pond is seen out the window of NASA's HU-25C Guardian Falcon aircraft during a flight over the Beaufort Sea on July 14, 2016. The flight was undertaken to measure the characteristics of melt ponds on the surface of Arctic sea ice. (Source: NASA/Richard J. Yasky) Now that El Niño is fading, Earth does seem to be coming off the feverish highs that have characterized monthly reports from NASA since October of 2015. Every month since then has demolished previous monthly records — except June 2016. The month's global average surface temperature was .79 degrees C (1.42 F), above the long-term mean. The previous warmest June came in 2015, with a global average temperature of .78 degrees C (1.4 F). While 2016 is likely to set a record for warmest year, that's not true of 2017, thanks to El Niño's passing and the probable development of a cooling La Niña phase by winter. If things do turn out that way, you'll most likely hear doubters of climate change sowing confusion with claims of global cooling. Don't buy it. "One year being warmer and another cooler isn’t really relevant," Schmidt cautions. What is relevant is very simple: "sustained increased temperatures.” And since the 1960s, that's precisely what we've seen.