The End of Easy Oil

Canada’s tar sands will soon be our top source of imported oil. But will that energy be worth the costs? 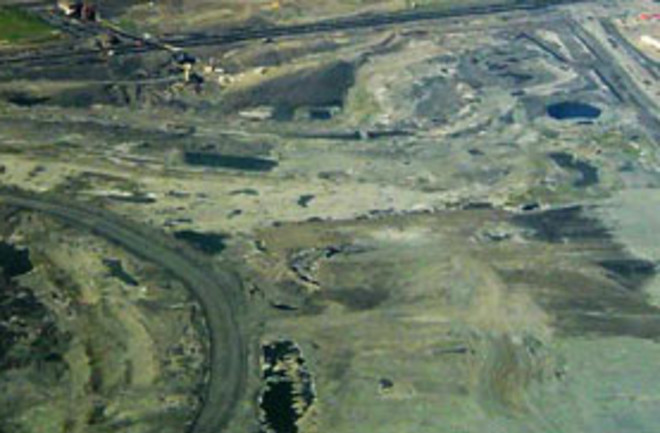 “We have the energy,” declares a road sign that welcomes visitors to Fort McMurray in Alberta, Canada. It is no idle boast: This city of 70,000 lies in the heart of Canada’s oil sands, geologic formations that collectively contain 13 percent of the world’s proven oil reserves. During the early 2000s, a massive oil-extraction industry boomed here, rapidly transforming vast stretches of boreal forest into strip mines. But when oil prices tumbled with the global recession, Alberta’s energy industry took a big hit. In mid-2008 the Norwegian company StatoilHydro withdrew its application to build a $4 billion upgrading plant; Royal Dutch Shell decided to shelve a mining construction project that fall. An estimated $90 billion in development contracts were canceled or put on hold, bringing the oil sands industry to a crossroads.

To many environmentalists—and, less predictably, to many energy developers as well—the slowdown in oil sands extraction may prove to be an unexpected blessing. The United States has become deeply reliant on extreme extraction from Canada’s tar sands, which this year are expected to become this country’s top source of imported crude, surpassing our purchases from the vast oil fields of Saudi Arabia. The recession “has given the oil sands industry a chance to step back and breathe,” says David McColl, head of oil sands studies at the Canadian Energy Research Institute, a nonprofit whose membership includes government departments, the University of Calgary, and energy companies. With the slowdown, developers must improve efficiency to stay profitable, making changes that will both help the bottom line and begin to address some of the tough environmental problems associated with tar sands oil.

Worldwide, mostly in Canada and Venezuela, oil sand reserves total a stunning 2 trillion barrels of oil. That is equivalent to 280 years of America’s current consumption, although only around a tenth of that total appears to be recoverable with current technology. Unfortunately, the process of extracting, upgrading, and refining the fuel is dirty and resource-intensive. In Canada, relatively shallow oil sand deposits lie beneath a 1,500-square-mile region just north of Fort McMurray. Developers access the sands by literally scraping away the earth’s surface, along with anything that happens to be living there. The raw material extracted—a thick, black goo called bitumen—makes up 10 percent of the harvested material by weight. The rest is sand and small amounts of water. Two tons of sand must be processed to yield a single barrel of oil, producing twice as much greenhouse-gas emissions as the processing of conventional crude. (Deeper reserves must be forced to the surface by an injection of pressurized steam, with even greater emissions; about 40 percent of Canadian oil from the sands is produced this way.) Each barrel of bitumen also generates more than 500 gallons of tailings, a liquid by-product laced with traces of bitumen and other pollutants. Operators hold the tailings in giant ponds, many located adjacent to the Athabasca River, which runs through eastern Alberta. Those ponds already cover an estimated 50 square miles, and an analysis of the industry’s seepage records by the Canadian environmental advocacy group Environmental Defense suggests that every day around 3 million gallons of contaminated fluid leaks into the surrounding area.

Even more unnerving are the findings of a recent study by ecologist David Schindler at the University of Alberta. He and his colleagues found that over the course of four months, 11,400 tons of particulate matter—including bitumen and cancer-causing polycyclic aromatic compounds—were deposited within 30 miles of oil sands upgrading facilities belonging to two of Canada’s major oil sands development companies, Suncor and Syncrude. Sampling of the Athabasca River revealed that pollutants appeared in greater concentrations downstream from the facilities and were not detected in comparable sites farther away, the researchers say. “The concentrations there are in the range where deformities and mortalities would be expected in fish,” Schindler says, “and the compounds that we found are known carcinogens in humans.”

Environmental concerns that were brushed aside when oil prices spiked a few years back have gained traction since the economy cooled. In February the Whole Foods grocery chain threw its weight behind a campaign to boycott companies that use fuel generated from the oil sands. And in June Syncrude was found guilty of violating provincial and federal law when 1,600 waterbirds died in one of its tailings ponds near Fort McMurray (the company may appeal the decision). Regulators have also started to assert themselves more forcefully. Last year Canada’s Energy Resources Conservation Board issued new rules requiring at least 20 percent of the fine particles from new tailings to be captured starting in 2011, and 50 percent by 2013. Suncor has since begun developing a new technology that would mix some refining by-products with a polymer, creating a dry solid that can be more easily contained and reducing the amount of liquid that ends up in the toxic ponds.

Such changes will become increasingly important as the world economy recovers. Oil sands development has begun to pick up, with a projected $13 billion in new investment in 2010, a $2 billion increase from 2009. A recent industry report estimates that oil sands production, which currently stands at around 1.5 million barrels a day, could jump 46 percent by 2015. The United States now imports 22 percent of its oil from our northern neighbor, and China has also shown interest in Canada’s sands, taking a $1.7 billion, 60-percent stake in two new projects in northern Alberta. In short, the tar sands—like deep oil—will probably remain an important part of the energy picture for the foreseeable future.

“Oil sands and offshore drilling are both symptoms of the same problem: We’re running out of easy oil,” says Simon Dyer, oil sands director at the Pembina Institute, a nonprofit sustainable energy research organization. But with ingenuity, smart regulation, and better enforcement, government and industry may be able to find a path that meets our needs until clean—or at least cleaner—energy sources can step up to the task.

Oil sands Also known as tar sands, these are natural deposits of sand, silt, and clay mixed with a heavy form of oil.

Upgrading The process of heating, distillation, and hydrogenation that turns bitumen into synthetic crude oil for refining.

Tailings A watery by-product of oil sands processing, containing traces of oil and a host of other pollutants.