I suppose you have heard about the recent Disneyland measles outbreak. The story is receiving wide coverage in the media, triggering a fresh wave of angst over the increasing reoccurrence of preventable diseases in the United States--and outrage over the small percentage of parents who do not vaccinate their children. Last year, per the Centers for Disease Control (CDC), there was a spike in measles cases in the United States, stemming, it seems, from unvaccinated travelers who brought the disease back with them from the Philippines, where a large outbreak has been occurring since 2013. A general media narrative taking shape now with the Disney outbreak story is informed by this CDC graphic from last year. 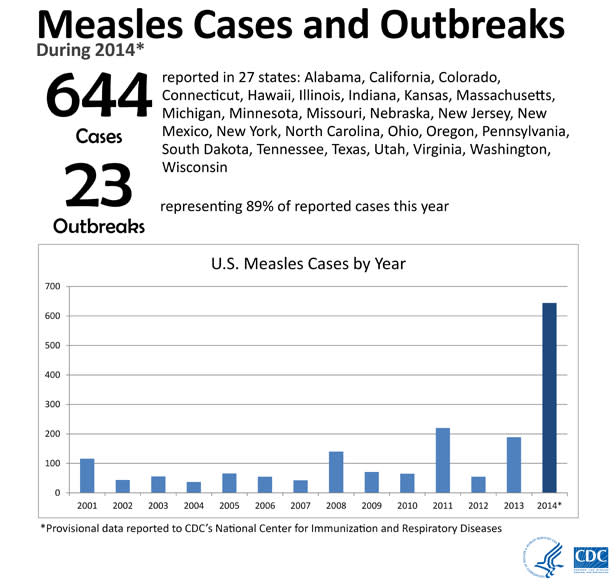 So what's the latest news on the Disney-centered outbreak? Via the Associated Press (AP):

In a rash of cases that public health officials are rushing to contain, at least 70 people in six states and Mexico have fallen ill since mid-December, most of them from California. The vast majority of those who got sick had not gotten the measles-mumps-rubella, or MMR, vaccine.

Some of the media coverage has focused on "pockets" of unvaccinated children in certain California communities where vaccine-averse parents have clustered. As the CDC notes of the three largest measles outbreaks of 2014, "transmission occurred after introduction of measles into communities with pockets of persons who were unvaccinated because of philosophical or religious beliefs." A new study (PDF) on these geographic clusters has just been published in the journal Pediatrics. A high concentration of unvaccinated children make these communities much more susceptible to outbreaks. TheLos Angeles Times, advancing a theme echoed in many media stories, writes that the Disneyland outbreak "has generated increased concern about the rise in the number of parents who do not immunize their children." Similarly, the Washington Post wonk blog, referring to a 2014 survey, says that "only 51 percent of Americans were confident that vaccines are safe and effective, which is similar to the proportion who believe that houses can be haunted by ghosts." The two impressions you get from such articles is that more parents are not vaccinating their children and that many Americans are not confident in the safety of vaccines--and both these impressions would be dead wrong. Dan Kahan, a Yale researcher who studies science communication and risk perception, was dubious about the findings in that survey cited by the Wonk blog. In an email exchange with me, he said:

I don't know what the survey item was, but I do know that if one constructs valid measures, one can easily show that there is overwhelming confidence in vaccine safety. Items that ask whether people are "concerned" about vaccine "side effects" are not a valid predictor of vaccine hesitancy among parents; even parents who make sure their children get every vaccine will say "yes" to that question -- it's simply not a valid indicator of vaccine hesitancy. Indeed, no public opinion survey of the general public can give anyone useful information on vaccine risk concerns. The only valid evidence of that generally is the National Immunization Survey, which uses actual vaccine behavior to determine vaccination rates. It shows that there has been no drop off in vaccination rates in more than 10 yrs -- & no measurable increase in people exempting from vaccination (that figure is below 1%).

Nonetheless, the recent spike in measles cases in the United States is the background context for the Disney/measles outbreak story. So, as the New York Timesreports:

The latest outbreak has renewed a heated debate about an anti-vaccination movement championed largely by parents who believe discredited research linking vaccines to autism, or who believe that the risks of some vaccines, including the measles inoculations, outweigh any potential benefit.

This kind of narrative framing taps into the frustration of medical professionals on the frontlines of pediatric health, who lash out at vaccine-hesitant parents. Examples below. From the AP:

Dr. James Cherry, a specialist in pediatric infectious diseases at the University of California, Los Angeles, said the outbreak was “100 percent connected” to the anti-immunization campaign. “It wouldn’t have happened otherwise — it wouldn’t have gone anywhere,” he said. “There are some pretty dumb people out there.”

This soundbite was picked up by other journalists on Twitter:

On anti-vaxxers, UCLA prof says: “There are some pretty dumb people out there.” http://t.co/EPZt0Xv5pC — Charles Ornstein (@charlesornstein) January 22, 2015

To which Brendan Nyhan, a communications scholar and political scientist at Dartmouth, responded:

On the quotes in the AP and NYT highlighted above, I asked Nyhan via email to elaborate:

I’m concerned that some vaccine advocates and doctors have been labeling people who aren’t vaccinated as “selfish” or “dumb” during coverage of the Disneyland outbreak. We need to maintain and strengthen the consensus around vaccination, but the most effective way to do so isn’t by polarizing and dividing people. The vast majority of parents who don’t vaccinate are intelligent and well-meaning people who are trying to do what’s best for their children. We need to help them make better choices, not ridicule them.

There are communication studies from experts that point to more constructive approaches, some of which I wrote about last year. Meanwhile, it's worth asking if the media, in its Disneyland/measles outbreak coverage, is 1) overstating the importance of the anti-vaccine movement, and 2) eliciting the kinds of reactions from public health professionals that are more likely to unnecessarily demonize and alienate vaccine-hesitant parents? This is not to downplay the real consequences of misguided decisions made by vaccine resisters. Clearly, they are endangering their fellow citizens. But we should be careful about drawing the wrong conclusions from these episodes. As Kahan also remarked to me:

I'm sure it's true that outbreaks are more likely to occur in areas with undervaccination enclaves. But that's been true forever; it's not new. The claim that outbreaks are tied to declines in vaccination rates or growing parental resistance, etc., is not true. The media narrative here is comparable to the one on whooping cough [in 2013], where media kept insisting that the outbreaks were caused by lower vaccination rates. Vaccination rates hadn't dropped. It turned out the new booster shot--made with dead rather than live pertussis -- was not as effective. Reporters ignored this for quite some time, but eventually the word got out.

Kahan thus cautions against jumping to the wrong conclusions again with the latest measles outbreak:

The low-vaccination enclaves *are* a public health problem. But attributing them to general anxiety over vaccine risks in public is not useful -- and in fact is itself dangerous. Misdirected concern also ends up confusing private funders, who are more likely to be suckered by advertising consultants into a "social marketing campaign" when what they ought to be doing is supporting the research of a guy like Doug Opel at the University of Washington, who has developed a very decent screening instrument to help pediatricians identify parents who are likely, out of fear or confusion (they aren't marching around like Jenny McCarthy et al; they'd be easy to spot then!), to have their kids skip shots. With an instrument like that, doctors can focus attention strategically on parents who might well respond to counseling. Of course, one can use empirical methods to develop good counseling protocols too -- if you can identify who the likely nonvaccinators are in an effective way. That's where the real public health attention should be: on supporting valid studies to designed targeted identification and counseling.

As this latest measles outbreak runs its course, perhaps some of my colleagues in the media will take a look at the emerging research that aims to foster more constructive engagement on vaccine issues. UPDATE: Julie Leask, a social scientist at the University of Sydney, Australia is an essential source for anyone seeking insight into risk communication and vaccine-related issues. I queried Leask as I was writing this post. Below is her response, which, due to our different time zones, came in after my post went up. Please take a minute to read her perspective: The extent of the Disneyland outbreak is a big concern because measles can be a very serious disease, causing pneumonia, convulsions, croup, inflammation of the brain (encephalitis), which could result in hospitalisation and even death. But the way the problem is being explained in the media right now generally is unhelpful.To be committed to the science of immunisation ideally comes with a commitment to the science of immunisation behaviour. Media often present this problem as refusal to vaccinate. But the evidence is clear and it's more complex: under-vaccination is broadly about a lack of acceptance and a lack of opportunity to vaccinate fully or on-time. It's not just the haves, but the have-nots who don't fully vaccinate.A typical measles outbreak will reveal this. There will be children whose parents refused vaccination; children whose parents were unwittingly not up to date for lack of access; affordability or awareness; adults and travellers who didn't get a needed booster; and babies who are too young to be vaccinated.Some of the solutions to under-vaccination are at our fingertips. For vaccines to reach people you need to have ‘well oiled’ systems, which include free and accessible vaccines, national registers, reminders, incentives and reasonable sanctions. Ensuring services are culturally respectful is important so people are not put off attending. If we keep focusing only on the active refusers alone, governments get off too lightly.Having said that, active refusal of vaccines remains a real and persistent problem. The evidence base is very limited but there are some promising strategies. At a state level, exemptions that require the signature of a physician minimise the active non-vaccinators. In the physicians office, making a positive recommendation, spending time with hesitant parents (and less with entrenched decliners), building trust and rapport and even if they delay or don’t vaccinate, keeping the door open. We also need try out community based approaches first by better understanding the social norms and group commitments that lead parents to not vaccinate.It's a difficult one because it's much harder to change motivation than to change the practical barriers. But there are researchers around the world committed to doing this.

To end, it's probably appropriate to quote from our recent article here:

Vaccine programs are underpinned by a rigorous science determining their efficacy and safety in populations. There needs to be a similar level of commitment to identifying and testing the interventions designed to increase uptake of vaccines among vaccine-hesitant parents.