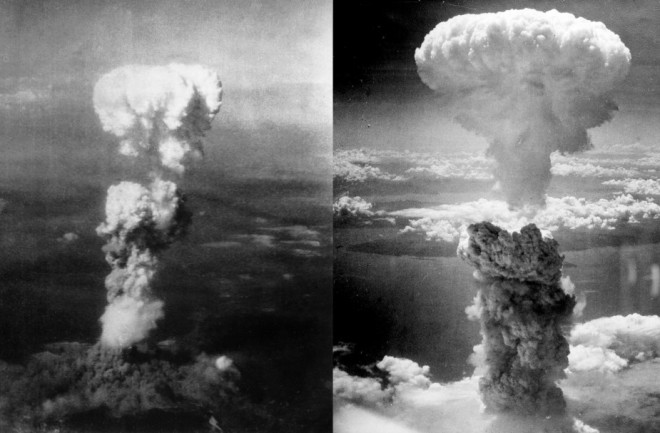 Mushroom clouds blossom over Hiroshima (left) and Nagasaki (right) from atom bombs dropped by the United States on August 6 and 9, 1945. (Source: Wikimedia Commons) Imagine four atomic bombs like the one that incinerated Hiroshima, Japan on Aug. 6, 1945 exploding in the atmosphere every single second of every day of every week and every month, year after year, ad infinitum. That, says John Cook and colleagues at the web site Skeptical Science, is a good way to understand the excess heat that is building up in the atmosphere as a result of humankind's emissions of carbon dioxide and other greenhouse gases. Four atomic bombs' worth of extra energy, every second. My friend and fellow Discover blogger Keith Kloor called this, well, explosive comparison "The Climate Bomb." Thus my headline, "The Climate Bomb Redux." I found it compelling at first. But despite my respect for Skeptical Science — a site I have used many times — I soon found myself taken aback by the comparison. I also began to wonder whether it really would help improve climate change communication, and also about the scientific context. So I decided to investigate. This post is the result of what I've come up with. Overall, I think there are two main problems with the comparison. First, it may have the opposite effect than the one intended by Skeptical Science. Rather than increase public understanding of climate change and thereby prompt action, it may just lead to greater polarization. The second is scientific in nature: Four Hiroshima atom bombs of heat per second sounds like a whole lot — and the comparison is certainly scary. But there is a disconnect here that is likely to cause people to dismiss it: Despite all that energy, the global average temperature hasn't exactly soared. Averaged over the whole globe, it has gone up by about 0.85 degrees C (1.5 degrees F) since 1880, according to the latest report from the Intergovernmental Panel on Climate Change. While that small amount amount is linked to significant changes in climate that pose all manner of risks, my guess is that for most people the image of a nuclear apocalypse doesn't quite jibe with their own day-to-day experiences of those changes. The overall problem is that there is a gross mismatch in scale between an exploding atomic bomb and our planet's climate system. More about that as we dig deeper.

Just so you can hear it from the source, here's the top of the article by John Cook at Skeptical Science:

When scientists add up all the heat warming the oceans, land, atmosphere and melting the ice, they calculate that our planet is accumulating heat at a rate of 2.5x10^14 Watts. This is equivalent to 4 Hiroshima bombs worth of heat per second. When I mention this in public talks, I see eyes as wide as saucers. Few people are aware of how much heat our climate system is absorbing.

Click for information about the widget. To better communicate the energy imbalance our greenhouse gases are causing, the folks at Skeptical Science have even released a widget that can be embedded in blogs. "The widget shows the amount of energy that has been and continues to be added to the earth's climate system, expressed in ways that non-scientists can more easily relate to," Cook says. My bet is that if you're really concerned about climate change, have followed the issue closely, and believe that urgent action is necessary, the Hiroshima comparison has fortified you in your beliefs. And you probably think that it could help bring others over to your way of looking at the issue. Conversely, if you consider yourself a skeptic of climate change science, think the risks have been overblown, and oppose intervention in the economy to mitigate climate change, you probably find the comparison outrageous, and maybe even offensive. In other words, how you interpret and react to the comparison is most likely determined by what you already believe, and that it's therefore unlikely to have the impact that Jon Cook and the others at Skeptical Science hope for. In fact, it's more likely to contribute to the polarization that has stymied action on climate change than ameliorate it.

Lack of Public Understanding is Not the Problem

The assumption that seems to underlie efforts like this is that if improved communication could lead to better public understanding then we'd get some action on climate change before it's too late. As a science journalist, I've been dedicated to the idea that an informed public is essential for democracy. But I also realize that this goes only so far when it comes to complex scientific issues involving risk, and climate science especially. It is incredibly complicated, and there's just no way many non-scientists are going to gain a deep understanding of it, Hiroshima bomb comparisons notwithstanding. And even if they could, it's not clear that a lack of understanding is what's actually holding back public consensus on climate change. Consider medical x-rays and childhood vaccines, both complicated issues involving risk. While there is some controversy at the fringes, the overwhelming majority of us get an x-ray when our doctors recommend one, and most parents get their kids vaccinated. And I would venture to guess that most of us have no clue what the science actually says about these risks. Dan Kahan, a professor of law and of psychology at Yale and a member of the Cultural Cognition Project, has written a lot about this. Here's a snippet from one of his blog posts last May:

. . . if you notice all these boring, non-polarized forms of science-informed risk regulation, you'll realize that the thing that makes some issues become polarized can't be lack of public knowledge about the science surrounding them. It's true that members of the public don't know science much about climate change, nuclear power, the HPV vaccine, etc. But the public doesn't know anything more about the science relating to the vast range of issues that fail to generate polarization.

So lack of understanding about climate change isn't the issue, he argues. Polarization is. Writing in Nature last year, here's how he put it:

The trouble starts when this communication environment fills up with toxic partisan meanings — ones that effectively announce that ‘if you are one of us, believe this; otherwise, we’ll know you are one of them’. In that situation, ordinary individuals’ lives will go better if their perceptions of societal risk conform with those of their group.

I very much doubt that John Cook and his colleagues at Skeptical Science would be happy with increased polarization on climate change. But I fear that is what the Hiroshima comparison will accomplish.

A Lack of Scientific Context

Even if it's true that energy is building up in the atmosphere at the rate of four Hiroshima bombs per second, important context is missing. It's an issue of scale: The Hiroshima atomic bomb released its energy over a relatively small geographic area, and almost instantaneously, whereas the radiative imbalance from anthropogenic greenhouse gases is causing energy to build up in the incredibly complex climate system, over a vast geographic scale, and on a timeframe best measured in years and decades. So the Hiroshima comparison is only part of the story. James White, a colleague of mine here at the University of Colorado, and director of the Institute of Arctic and Alpine Research, agrees. Here's what he had to say, in an email message:

I think your instinct is correct. The Earth is a very large place, and the total solar energy is much, much larger than the accumulated imbalance of which they speak. For example, small, natural perturbations in climate equate to many, many Hiroshima bombs. That said, the Earth is indeed accumulating energy, and the problem of how to translate that into terms people understand is daunting.

White's point about small natural perturbations are echoed by Kevin Trenberth, a climate scientist at the National Center for Atmospheric Research who has published estimates of energy flows through the climate system. To put the atomic bomb comparison in proper perspective, he said this: "Think of the convective cloud from a nuclear explosion as being more like the energy in a small, single thunderstorm." With this in mind, we can change the comparison: The energy that's building up in the atmosphere as a result of our actions is roughly equivalent to five small thunderstorms every second. Somehow, that doesn't seem quite so apocalyptic, right? Thunderstorms are popping off all around the world every day. Compared to the amount of incoming energy from the sun, the human impact on the timescale of a year also does not sound quite so apocalyptic. According to Trenberth, that incoming solar energy is equal to about 175 petawatts (175 plus 15 zeros). "About 120 of those petawatts is absorbed and is what drives the climate and hydrological system," Trenberth says. "That is the natural flow of energy through the system." How does human-caused global warming compare? It amounts to about 0.46 petawatts every year. In other words, the natural flow of energy through the climate system in one year is 275 times greater than our contribution. Of course, over the long run that extra heat really adds up, and is already causing the climate to change. And that's the whole point: Climate change is a long-term phenomenon, not one that's best measured on a timescale of seconds.