The Chelyabinsk meteor seen from space 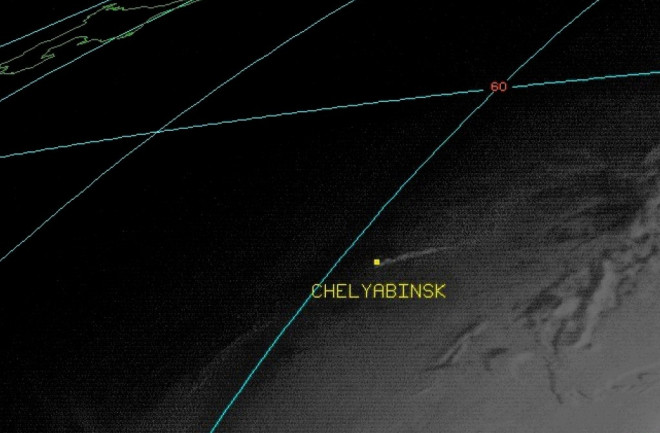 The Chinese FY-2D satellite captured an image of what appears to be an east-west vapor plume in the atmosphere, likely from the meteor that streaked over Chelyabinsk, Russia. The image was first posted by the Cooperative Institute for Meteorological Satellite Studies. I've cropped and enhanced it to emphasize the plume. Since the Chelyabinsk meteorite streaked across the Russian sky, shattering windows in its wake and sending a thousand people to the hospital, I've been wondering how many satellites captured its passage. On the day of the event, the Meteosat-9 weather satellite recorded a widely distributed image of the meteor streaking through the atmosphere. I've been looking for others, and on Saturday, the Cooperative Institute for Meteorological Satellite Studies posted one on their blog. I pulled the image into one of my image editing applications (Aperture), cropped it, and enhanced it to bring out the vapor plume created by the meteorite as it hurtled through the atmosphere. The image above is the result. (With apologies to the awesome folks at CIMSS if I've somehow sullied the original image!)