The Burning Season: Alaska's Interior is on Fire 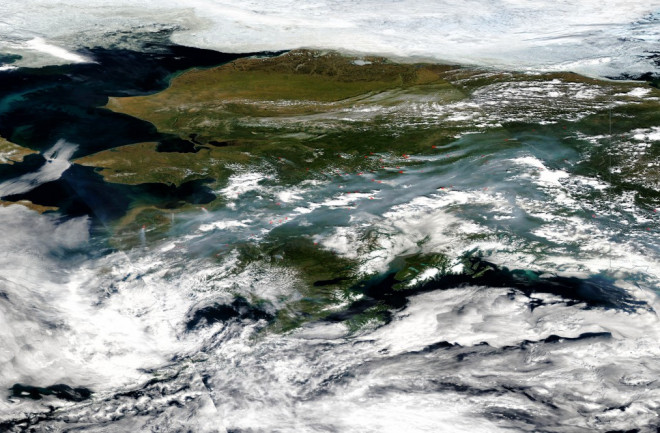 NASA's Aqua satellite acquired this image of Alaska on Monday, June 22, 2015. Red dots indicate areas where the satellite detected the anomalous warmth of wildfires. (Source: NASA Worldview) So far this year, 504 fires have scorched 513 square miles of Alaska — an area the size of the sprawling city of Los Angeles. And the burning season has only just begun. Make sure to click on the image above so you can get a full view of just how much of Alaska's interior is burning. You're looking at almost the whole state (minus a bit of the Aleutian Island chain and southeastern Alaska). Those red dots indicate where NASA's Aqua satellite detected anomalously hot areas yesterday (June 22) — the signature of wildfire. And check out that bluish smoke. It extends from the Yukon Delta National Wildlife Refuge in the west, across central Alaska and on to to the Canadian border in the east, a distance of about 800 miles. As I'm writing this on Tuesday, June 23 the air quality in Fairbanks was rated as unhealthy, thanks to the pall of smoke. As of the latest count, 261 fires are burning in Alaska. (Go here for a map showing the location of all active Alaskan wildfires.)

Orange and red colors in this Google Earth map indicate where temperatures significantly exceeded the long-term average in May, 2015. (Source: NASA &Google Earth) As the Google Earth map above shows, Alaska baked in May. In fact, the state experienced it's warmest May in 91-years of record keeping. At 44.9 degrees F, it was 7.1 degrees above average, according to the the latest monthly report from the National Centers for Environmental Information. But it wasn't just warm in May. It was also the 16th driest May on record for the state, and the extent of snow cover was the smallest on record.

As the graph above shows, temperatures during May have been getting warmer over time. And this May's record warmth in Alaska pretty much shattered the previous record in 2005. This May was almost off the charts. May was also the warmest on record globally (or in a tie for second warmest, depending on which analysis is used).

SEE ALSO: The Pope's Encyclical is Out, and so is the Verdict on 2015's Climate So Far — Warmest on Record

NASA's Aqua satellite acquired this image of Lake Baikal in Russia and the surrounding region on June 21, 2015. Note the bluish smoke plumes from numerous wildfires. (Source: NASA Worldview) The satellite image above of Russia's Lake Baikal in Siberia shows the impact of warm temperatures in that region. (Click here for a Google map showing Lake Baikal's location.) Multiple wildfires were burning around the lake when the Aqua satellite acquired this image on June 21. For a sense of scale, consider that the lake is 400 miles long! Siberia experienced its warmest spring on record. As a story in Siberia Times puts it:

Some parts of Siberia were warmer than usual by 6C, with a host of anecdotal examples of normal meteorological rules being turned on their head. For a few days in late April, for example, the city of Irkutsk boasted higher temperatures than Madrid. The ice on vast Lake Baikal was too thin or non-existent even in February and March, forcing the cancellation of a number of events. In the past, it was safe to drive cars across the frozen lake, the deepest in the world.

I'm actually quite interested in what's happening around Lake Baikal — because my son is on its shores right now! I haven't heard from him in a few days, probably because the hike-in hostel where he's staying doesn't have wifi. I hope he's taking pictures. If so, and if he's got anything interesting, I'll share them in a forthcoming post.