The Blockbuster Nor'easter as Seen From Space 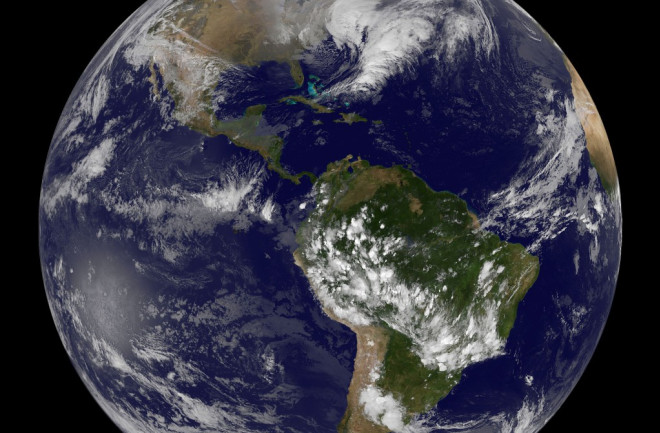 A GOES-13 satellite view of the full disk of the Earth. The nor'easter is visible toward the upper right. (Source: NOAA) |Update: See the two new spectacular satellite images I've added below. | As I'm writing this post, it's 11:30 p.m. on the U.S. East Coast and heavy snow has been falling from New York City all the way north to New Hampshire. More than 29 million people are under a blizzard warning. Weather bloggers, journalists, Tweeters, Instagramers, etc., are blanketing this storm with minute-by-minute updates. So I thought I could add some value by featuring some imagery that puts this nor'easter storm in perspective — the very broad perspective of what it looks like from space. I've chosen three satellite images, plus one graphic based on the output of a weather model; I'll add others as they start rolling in. The image at the top of this post shows the storm from the broadest possible perspective. It was captured on Monday, January 26th, by the GOES-13 weather satellite. I find it compelling because you can see the size of the overall weather system in which the snowstorm is embedded.

A view of the developing storm acquired by the Suomi NPP satellite's VIIRS instrument on January 26, 2015. (Source: NOAA Visualization Laboratory) Here's a closer view of the East Coast of the United States, acquired by the Suomi NPP satellite today. Like the previous image, it helps us see the bigger context. Mind you, it's obviously not snowing within that entire big cone of clouds stretching from the Atlantic off the coast of Florida all the way up to Maine. But the image does provide a valuable sense of the meteorological context. And part of that context is actually the Gulf Stream, a current of warm water flowing north from Florida along the East Coast. Those clouds have blossomed over the current's relatively warm waters, helping to provide energy to power the nor'easter now pummeling New York and New England.

A still from an animation of GOES-13 weather satellite images of atmospheric water vapor with hourly lightning strikes overlain (red crosses), Jan. 25-26. Click for the animation. (Source: CIMSS Satellite Blog) I find this image particularly compelling. It's one frame from an animation of GOES-13 weather satellite images showing water vapor in the atmosphere. (Click the image to see an animation created by the Cooperative Institute for Meteorological Satellite Studies.) The green tones show areas with the highest levels of water vapor. And those red crosses show places where lightning has been detected.

The image above shows the set up for this nor'easter, which can help explain that lightning. You're looking at the forecast position of the jet stream from earlier today. I've marked two "jet streaks" — areas within the jet stream where winds accelerate. There are two of them, and when two jet streaks come together like this, they tend to cause air parcels high up in the atmosphere to diverge. This in turn tends to deepen low pressure at the surface (which I've circled). Lastly, the final ingredient is that trough of low pressure. Put all three together and you have a meteorological recipe that causes air to rise high into the atmosphere. As this happens, the air cools, causing water vapor to condense, forming convective clouds that tend to be accompanied by discharges of lightning. Not to mention a lot of precipitation — which is currently falling copiously as snow from New York to Maine. I'll be following the evolution of this storm with great interest and will be keeping an eye out for more compelling imagery. | Update 1/27/15: Here are two new images, from NASA's Earth Observatory:

The Visible Infrared Imaging Radiometer Suite on the Suomi NPP satellite acquired these nighttime images at 1:45 am U.S. Eastern Standard Time (06:45 Universal Time) on January 27, 2015. The top image, lit by moonlight and city lights, shows a nor'easter off . . . the East Coast of the United States. City lights are blurred somewhat by the cloud cover. The second image shows the same scene in longwave infrared radiation, with brighter shades representing the colder temperatures of snow-producing clouds.