The Atlanta Snowpocalypse as Seen from Space 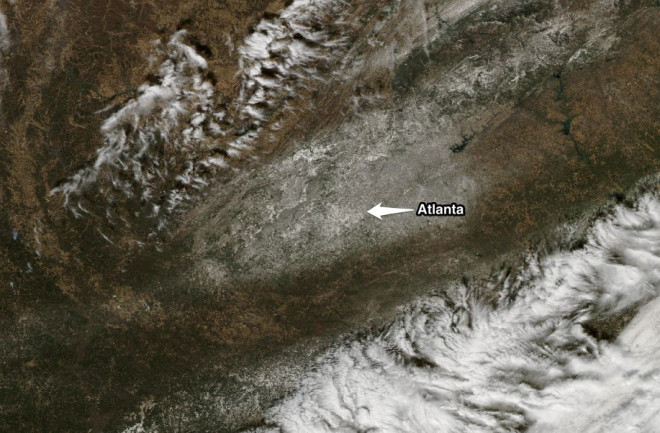 The snow cover over the Atlanta metro area and the surrounding region as seen by NASA's Aqua satellite on Thursday, Jan. 30. (Source: NASA) It was inevitable, I guess, that the breakdown experienced by Atlanta during the recent Arctic outbreak and snowstorm would come to be known as the "Snowpocalypse." The term has been used before, of course. But with folks stranded on the freeway for 9 or more hours, kids having to be rescued by National Guard Humvees from ice-bound school buses, and basically the entire metro area coming to a screeching standstill, I'm thinking the term really fits this time. And yes, photos of those stranded cars on the road really do look like the publicity poster from The Walking Dead. From space, it almost looks like Atlanta was singled out in some way. I'm not saying I believe that. Of course I don't. But check out the image above, captured by NASA's Aqua satellite today. Atlanta sits near the middle of an oval-shaped region covered in snow, with surrounding areas snow-free. The snow cover does pick up again a little to the northeast, out of the frame. But still... As for those comparisons to The Walking Dead, the AMC television series about the zombie apocalypse set in northern Georgia, much has been written about that in the last day or so. But I think this snippet from a piece by Ian Bogost in The Atlantic is particularly noteworthy, in a creepy kind of way:

So, Atlanta’s post-snowstorm chaos didn’t resemble or recall the pop cultural zombie apocalypse so much as The Walking Dead premediated Atlanta’s infrastructural breakdown. Zombies might make for better television than snow and ice, but both phenomena terrify us because of their total unconcern for our human welfare, their willingness to overtake the grand machinery of our modern society for no reason whatsoever, not even because they hate us. In short, we practiced for the real “snowpocalypse” by means of the fictional zombie apocalypse. Even if we Atlantans may never admit it, we may even have hoped for such an event in order that our practice watching, reading, and playing The Walking Dead might have proven a useful investment, something more than mere apocalypse tourism.