The Arctic sea ice max for this winter was second lowest on record, thanks in part to an "extreme heat wave" 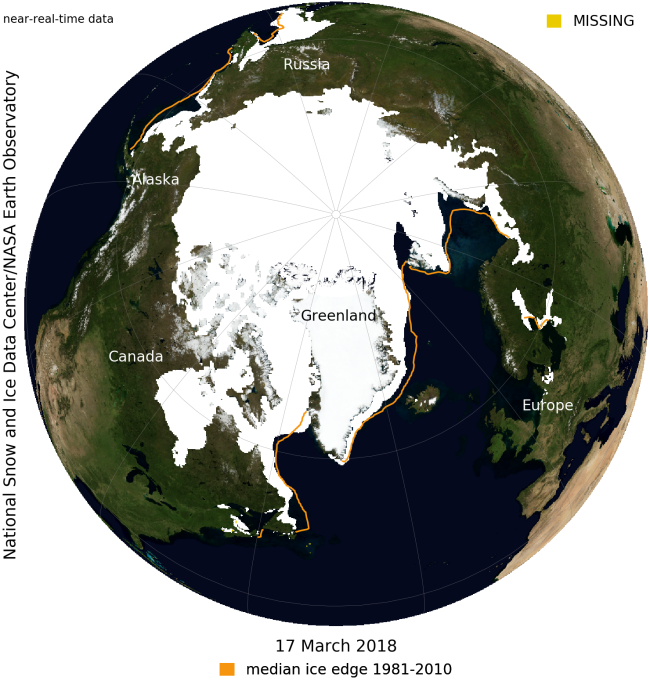 Arctic sea ice extent on March 17, compared to the long-term median. (Source: NSIDC) After expanding all winter, the Arctic's floating lid of sea ice has now reached its maximum extent — and it has continued an unsettling trend. The National Snow and Ice Data Center announced today that this year's maximum extent is the second lowest in the 39-year record of satellite observations. "The four lowest maximum extents in the satellite record have all occurred in the past four years," according to the NSIDC. Last year set the record for the very lowest. Arctic sea ice appears to have maxed out this year on March 17, with an extent that was 448,000 square miles below the long-term median. That area of lost ice would cover about two thirds of Alaska. Autumn freeze up occurred late this year, particularly in the Chukchi Sea off Alaska. This occurred in part because of large amounts of ocean heat being transported into the area through the Bering Strait. In addition to the delayed freeze-up, air temperatures were persistently high in the Arctic, helping to retard ice growth. And February brought "an extreme heat wave over the Arctic Ocean," according to the NSIDC. In the dead of winter, warm air from the south surged across the Arctic toward the North Pole, bringing temperatures that soared to, and possibly above, the freezing mark. "This is the fourth winter in a row that such heat waves have been recorded over the Arctic Ocean," the NSIDC says. A recent study shows that these winter heat waves are becoming more frequent and intense.

The SciencesThe Great Wedge of Astronomy
Recommendations From Our Store