The Arctic Continues to Bear the Brunt of Global Warming

As global warming has caused Arctic sea ice to shrink, NASA satellites have observed a significant increase in the amount of solar energy that has been absorbed in the region since the year 2000. (Source: NASA Scientific Visualization Studio)

Acknowledgment: I want to thank my friend and colleague, environmental journalist Susan Moran for help with this story. She covered the NOAA press conference today at the AGU meeting and sent me her notes.

The Arctic continues to warm faster than any other region, according a report released by the National Oceanic and Atmospheric Administration on Wednesday. Moreover, the extent of Arctic sea ice continues to shrink, and as a result more and more energy from the Sun is being absorbed by open sea water, helping to accentuate the warming. "We continue to see impacts from a persistent warming trend that began 30 years ago," said Jacqueline A. Richter-Menge, senior research engineer at the Cold Regions Research and Engineering Lab in Hanover, N.H. "We also continue to see significant year to year and regional variations." Richter-Menge spoke at a press conference held in conjunction with the release of the Arctic Report Card at the American Geophysical Union Conference in San Francisco. "Central to the story are Arctic air temperatures, which continue to increase at a rate of warming that is more than twice as fast as at lower latitudes. This well documented effect is called ‘arctic amplification’ of global warming." Arctic amplification occurs in large measure because human-caused global warming is causing floating sea ice in the Arctic to thin and shrink in extent year by year during the summer months. As this has occurred, more and more relatively dark ocean water has been exposed to sunlight. If you've ever walked across dark asphalt on a bright, sunny day, you know that relatively dark colors absorb more solar radiation than bright, reflective colors, like snow and ice. That energy is then re-radiated as heat, helping to raise air temperatures. The animated gif at the top of this post illustrates this effect. The first frame in the animation shows sea ice loss since the year 2000 in varying shades of blue. Overall, the extent of sea ice this past September was the sixth lowest since satellite observations began in 1979. Moreover, the eight lowest sea ice extents since 1979 have occurred in the last eight years. The second frame depicts the amount of solar energy absorbed in the region during the same period. As the animation shows, areas of the greatest sea ice loss also tended to absorb the most energy. (Data for both images came from NASA satellites.) 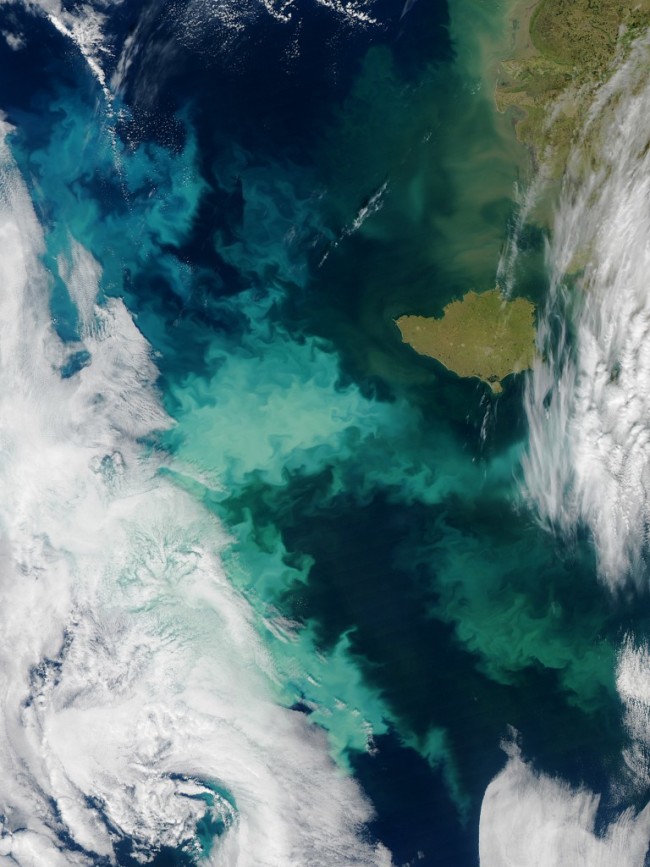 A bloom of phytoplankton in the Bering Sea this past autumn, as seen by a NASA satellite. (Source: NASA) Warming in the region is triggering other changes as well. The satellite image to the right shows one of them. As sea ice shrinks in summer, more sunlight reaches the sea surface in Arctic regions, helping to trigger blooms of phytoplankton. This image shows just such a bloom in the Bering Sea last fall. Other highlights from the report include these: 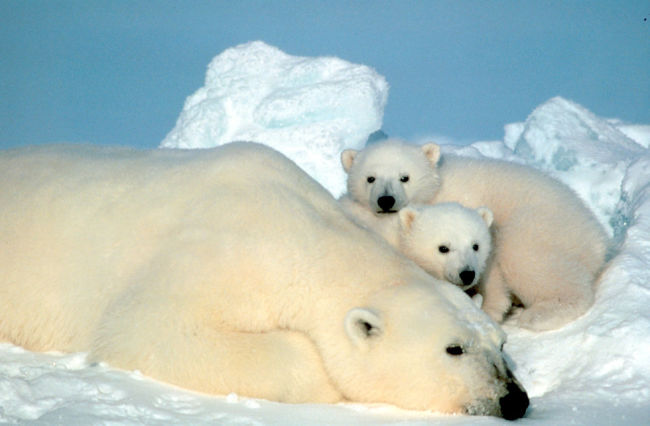 Loss of sea ice is affecting some polar bear populations, according to the Arctic Report Card. (Source: U.S. Fish and Wildlife Service.) "The impacts of the persistent warming trend of over 30 years remain clearly evident in the land and ocean environments, and these impacts are influencing the Arctic marine and terrestrial ecosystems," said Martin Jeffries in a prepared statement. Jeffries is editor of the Arctic Report Card and a Program Officer for Arctic and Global Prediction at the Office of Naval Research. "Given consistent projections of continued warming temperatures, we can expect to see continued widespread and sustained change throughout the Arctic environmental system." Craig McLean, acting assistant administrator for the NOAA Office of Oceanic and Atmospheric Research, noted the geopolitical importance of the Arctic. He said the goal of the report card was "to raise awareness across the United States so that the American people can understand that the U.S. is an arctic nation." The Arctic is crucially important for a variety of reasons — "from the strategic, to the climatological, to natural security, and many others."