The Arctic, as you've never seen it: beautiful and in distress

NASA has published a spectacular image mosaic of the Arctic — just as sea ice extent in the region was reaching yet another record low. How much sea-ice shrinkage are you responsible for? Keep reading... 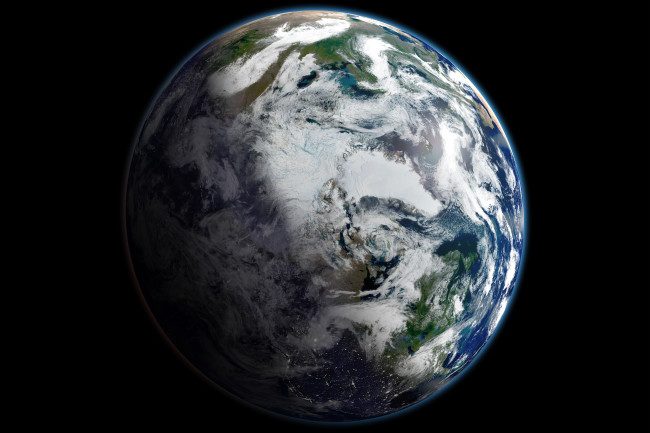 A composite of images captured by the Suomi NPP satellite shows the Arctic on September 2, 2012. (Source: NASA Earth Observatory) Satellites have been providing a synoptic view of the Arctic since 1979, helping scientists chart declines in sea ice driven largely by emissions of heat-trapping greenhouse gases. Now, NASA scientists have created one of the most beautiful satellite views yet — a mosaic of images from the Suomi NPP satellite. And shortly after the space agency published it, a new record was set: the lowest Arctic sea ice extent for October in the era of satellite observations. 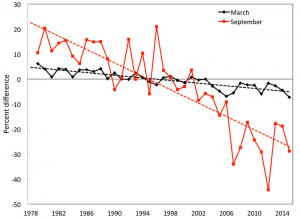 Time series of Northern Hemisphere sea ice extent anomalies in March (the month of maximum ice extent) and September (the month of minimum ice extent). The anomaly value for each year is the difference (in percent) in ice extent relative to the mean values for the period 1981-2010. The slopes of the black and red dashed lines indicate ice losses of -2.6% and -13.4% per decade in March and September, respectively. (Source: NOAA Arctic Report Card 2015) The spectacular image mosaic above shows the area as it looked to the satellite in early September. At this time, Arctic sea ice was headed for its seasonal minimum extent. Sea ice began expanding in October, but at an extremely sluggish rate. The images in the mosaic were acquired by the Visible Infrared Imaging Radiometer Suite aboard Suomi NPP during 14 orbits of the spacecraft on September 2nd. Multiple imaging channels were used, allowing nighttime portions of the Earth to be seen. The imagery was then stitched together, producing the beautiful, seamless mosaic. Make sure to click on the image to open it in a new window, and then click on it again for an extreme closeup. Also look to the bottom of the globe to see city lights at night in the United States and Canada. As beautiful as the image might be, the low extent of sea ice it reveals is an unsettling reminder of the role played by the Arctic region: as the proverbial canary in the coal mine for global warming. The Arctic is warming twice as rapidly as any other region on Earth. As NASA puts it, "Since the mid-2000s, low minimum extents in the Arctic have become the 'new normal.'" During October, the average sea ice extent was 980,000 square miles below the 1981 to 2010 long-term average for the month. That's an area more than three and a half times the size of Texas.

Here's the main proximate culprit, according to the NSIDC: 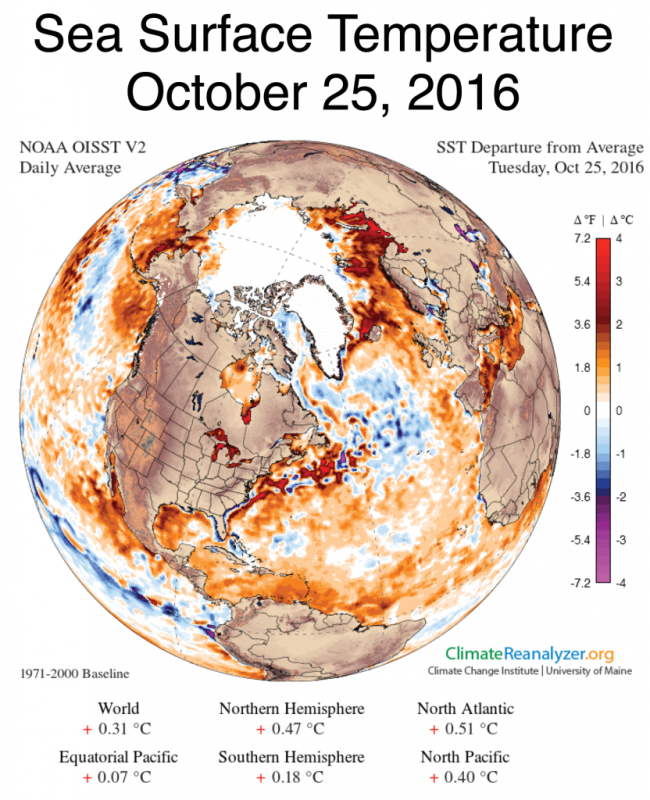 Sea surface temperatures in October were unusually high in large parts of the Arctic. (Source: Climate Change Institute/University of Maine) As suggested in the graphic above, sea surface temperatures in the Beaufort and Chukchi Seas, the Barents and Kara Seas along the Eurasian coast, as well as the East Siberian Sea, were well above average during October. This retarded sea ice growth. The unusual warmth had its origins months earlier. With the return of sunlight at the end of winter, Arctic sea ice normally starts a natural, seasonal retreat in March. This year, the retreat began much earlier than normal. This meant that larger amounts of water were exposed to the Sun for a longer period of time than normal. And that dark water absorbed a considerable amount of solar energy. "Finally toward the end of October, the surface ocean heat began to dissipate, triggering ice formation," the NSIDC notes. But even by October 25, sea surface temperatures were considerably warmer than normal in large portions of the Arctic, as the graphic above illustrates. Declines in Arctic sea ice have ultimately been tied to global warming from increasing concentrations of carbon dioxide and other greenhouse gases in the atmosphere. And now, researchers, have been able to show just how much of an impact each of us makes through our greenhouse gas emissions. For every metric ton of CO2 that a person directly or indirectly produces, 3 square meters of summer sea ice disappear in the Arctic, according to a paper published online in the journal Science. It was authored by Dirk Notz of the Max Planck Institute for Meteorology in Hamburg, Germany, and Julienne Stroeve of the NSIDC. Given U.S. per capita emissions of 16.4 metric tons of CO2, this means each American is responsible for about 530 square feet of Arctic sea ice loss during the summer. That's 40 times more than the average Bangladeshi. “So far, climate change has often felt like a rather abstract notion,” Julienne Stroeve says, quoted in an NSIDC press release. “Our results allow us to overcome this perception."